When the Hens Come Home to Roost

And the Countdown Continues... 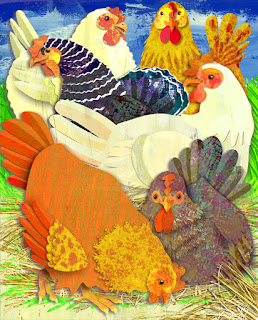 Since late 2011 I've focused most of my mental and physical energy on preparing for Boston.

First, because my plantar fasciitis and some posterior tibialis tendonitis flared up, so I had to figure out how to resolve the problem fast. For several weeks in December I couldn't run at all, and that made me more than a little nervous. The only fix I could find was weekly physical therapy and dry needling. Oh, the things we put up with in order to run. The costs in time and cash we are willing to spend to continue to run. And yesterday, for the umpteenth time this year I dragged my reluctant self into In Motion Rehab and asked Heather North to work her painful magic on me. But at this point, having had hundreds upon hundreds of needles poked through the thick soles of my feet, I groaned and said, "I am so tired of having to do this! Of having to inflict this pain on myself." And yet, I clenched my teeth and did what I must.

As that problem became manageable, my focus shifted to a fairly intense (for me) training schedule while dealing with a heavier than usual work load, a feisty, demanding, and energetic five year-old, a debilitating concussion, the worst case of the flu I've had in more than 10 years, and my mother's continuing battle against breast cancer, along with the usual stuff of life.

I became determined not to sweat the "small stuff". I decided that the important things would get priority, and everything else I'd have to let slide, at least a bit.

So what got priority?: My Daughter, my husband, my running. And that's where I've been for the past couple months.

Now, however, the chickens are coming home to roost - Baawwwk baawk bawwk... My house, my yard, my work, my life it seems is in disarray. All have suffered neglect, and it's not benign neglect. Suddenly, it seems, I've noticed all the things coming down around my ears and my "to do" list is 26.2 miles long - which I chew on, ad nauseum, when I'm trying to fall asleep. And so I toss and turn, and dream and dream, and wake exhausted in the morning.
While my priorities haven't changed I must now tweak my methods to continue to maintain my priorities. What might have worked last week, doesn't seem to work this week. Again, this happens (at least for me) when your training has hit a peak, and you begin to taper - that undivided attention suddenly strays - and what you see for perhaps the first time in several months, is quite a lot of flotsam and jetsam floating in the calming seas of life.

But here's the vicious catch: In order to run well and healthy, I need to sleep. In order for my family to flourish, I need to sleep (because I get very cranky when I'm tired). In order for my sanity to be maintained, I need to sleep (because I can not think clearly through sleep deprived bleariness). But, in order to sleep, I have to get some of these niggling concerns, the 'small stuff' of yesterday, resolved and off my 'to do' list.
I've heard many runners say that "Sleep is what you do when you can't run anymore". Runners are an obsessed group. Runners are prone to Stoicism. Runners sacrifice sleep for their true love: squeezing in that run before work and/or family demands. And I've been doing a little too much of this, in addition to not sweating the small stuff, and the result is that there are a lot of things upon which I must now impose some sense of order. The truth is that now the small stuff is not so small and its all gotten a little unmanageable which in turn compounds the sleep issue which makes everything else seem so much more difficult - and so I find my self spinning in a vicious circle. The solution?: It's time to tackle some of the 'to do' list and get that stuff off my obsessive mind.

So now I must deal with all these pesky chickens that I've allowed, for months, to run freely around the house. I chose not to notice them, but now they've gotten fat and pushy. I need to put them in their place, where they belong, so that I can sleep.
at March 27, 2012