On April 16th, 2012, the women who ran the Boston Marathon in 1972, the first year women were granted official entry into the race, will be firing the starter's gun in Hopkinton. These women - courageous trailblazers for all women runners and athletes - are often referred to as the "class of 1972".  The women who ran that year were required to meet the same qualifying standards as the men (3:30) - but at last, through persuasive argument and dogged determination, they convinced the powers-that-be to do the right thing.

Nina Kuscsik (below) won that inaugural women's race in 3:10:26. Impressive!

The battle to permit women's official entry in the Boston Marathon began several years earlier, when in 1967 Kathrine Switzer, registered as "K.V." Switzer, was attacked by Jock Semple after he discovered a "girl" was running the race. For an nice account of this see: http://deadspin.com/5896964/45-years-ago-an-enraged-boston-marathon-race-director-attacked-a-female-runner. 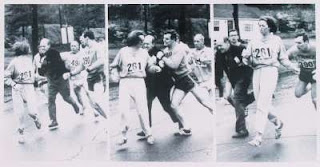 In past posts I've written about how I believe that this left a black mark on running's character and history, and that this needed to be addressed ( For the Sake of Our Daughters). Last year 43% of Boston finishers were women. Women now make up the majority of entrants at most road races, from 5k-marathon distances. And in Ultra distance races, the percentage of women who finish (out of the number who begin) is higher than the percentage of men who finish, though at this point more men still run ultras.

A lot has changed in 40 years. And I feel honored to run this race, this year, on this anniversary which means so much to me. And when the Wellesley women usher me through the "scream tunnel" at the 20k mark, I will have goose bumps as they will send me on my way for the second 20+k ;)