Gifts From My Irish-American Father

I have come to greatly dislike the way Americans celebrate Lá Fhéile Pádraig (The Festival of Patrick). Like most holidays celebrated in the US, this day has become an excuse to get stinking piss-faced on bad beer with pseudo-Irish names. Yeah, hate to say it but I gotta tell you - Killian's Irish Red is brewed by Coors. Ewwww.

Well here's news to all the Americans who become Irish on St. Paddy's Day - There's more to Irish culture than drinking, and if you can manage to go to the pub and limit yourself to one pint (yes, it has to last you all evening/night), then good for you, because the Irish don't pound the brewskies the way Americans tend to.

Call me a grump, but I will celebrate St. Paddy's Day with a run through the countryside, and some good company and lively storytelling.

Several years before my father died, he confided in me his wish that he and I hike around Ireland. I thought this a fantastically wonderful idea. At the time I had no clue that he would be gone so soon. And so there is something I must do, for my father and for myself...


I want to run around Ireland. 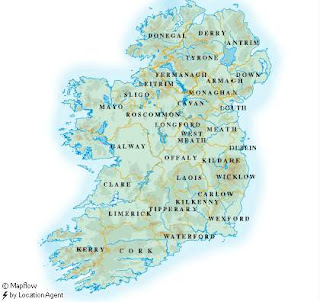 Though I think of my father everyday, every St Patrick's Day I think of my father in a different way. He was proud of his Irish heritage, and he possessed that Irish gift of lyrical story telling. Since he was hopefully the last child to be born in his family (Catholic Irish ya know) hie parents used up all the names on him. So, his full name was: Desmond Daniel Brian Patrick Kevin MacMahon As a child and later as an adult I loved listening to his stories of growing up in 1930s Flatbush, Brooklyn, NY.

As a school boy he was a runner, and spent many days running through Prospect Park, and later Van Cortlandt Park. He ran in Madison Square Garden, on a banked wooden track...

As a young runner, I always felt that I was somehow carrying on a family tradition. It felt like the right thing to do, for so many reasons. I felt a special kinship with my father.

I'm a runner because of my father - because of his stories, because he believed his daughters could do anything boys could do, because on early morning runs, with my father and my sister, I felt more at peace and in tune with myself then any other time. And this was where I ran... 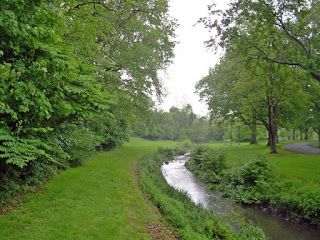 On every visit to New Jersey, I return to this place, I stop and I think...and I am thankful for it...


Is fear rith maith ná drochsheasamh.
A good run is better than a bad stand.

When I was 7 years old we traveled to Ireland. I remember the greenness of the place, the thatched roofs that drew in my imagination like a child's story book, riding horses through the countryside, narrow roads and stone fences meandering through lush fields disappearing into the distance, into the sky.

And I remember kissing the Blarney Stone.

The Blarney Stone is kept high up on the top of Blarney Castle. The stone stairway to the top is steep and narrow and polished smooth from thousands of feet taking cautious steps.  Legend has it that those who kiss it will be blessed with eloquence or the 'gift of gab'. I was a tiny girl, being held by what looked like an ancient Irishman. All that separated me from falling hundreds of feet to the ground below were the old chap's shaky hands and a wide metal grate - wide enough for a small girl to easily slip through. As I leaned back, over the edge of the castle, I brought my lips to the cold, smooth rock. Smack. I kissed that stone. 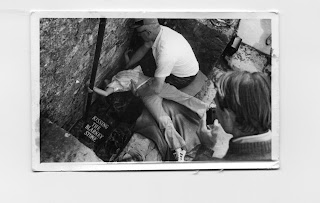 So two of the most cherished gifts I received from my Irish-American father: Running and, I hope someday, story telling - the way he did it, bringing to life for me the stories he lived. And I hope that I may pass that along to my daughter.

What St Patrick's Day means to me is running and the Irish tradition of story telling. So now I shall go for a run...

And an Irish blessing particularly fitting for runners:

May you be poor in misfortune,
Rich in blessings,
Slow to make enemies,
quick to make friends,
But rich or poor, quick or slow,
May you know nothing but happiness
From this day forward.
at March 17, 2012