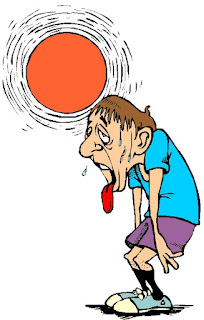 "That which does not kill us makes us stronger." ~ Friedrich Nietzsche


I've been doing this blog thing long enough to be able to look back at where I was last years at this time, and to notice certain seasonal patterns in my running attitude. It's not even July yet, but I've already got an August attitude going. Only downside of having an August attitude in June is that the end is nowhere near.

I hate the heat. This week I've been forced, due to circumstances beyond my control, to run at 9:30 am on hundred + degree days and it is absolute torture for me. Is I ventured out the door this past Tuesday my thermometer read 108 degrees! Now I know that couldn't possibly be true and the sensor is on the sunny east wall of my house, but it did actually feel like 108, though it was really only 99! Brrrrrrrr.

On hearing my whining, my southern friends helpfully told me to suck-it-up. That's life for them! Okay. But I didn't choose to live in Phoenix or San Antonio! And they don't have to deal with snow, icy winds and sub-zero temps in the winter. Having to deal with the worst of both seems fundamentally unfair. For those who have lived in Maine, there's a saying: "If you can't take the winters, you don't deserve the summers", and that applies to Colorado a bit as well.

Usually, sometime in August I hit a psychological wall of heat and exhaustion - but I am always comforted by the thought that fall is near. This year? No such luck. High temperatures right now are 15-20 degrees higher than normal and the many wildfires burning throughout this tinderbox state add dangerous smoke to the mix. And there seems to be no end in sight.

I'm already thinking of signing up for the May 2013 Colorado Marathon on the opening day of registration (July 15th) so that I can begin fantasizing about snowy winter long runs. I vowed last winter to take a winter off from marathon training - but now I'm rethinking that promise to myself. I'm also rethinking my early fall plans because I don't want to run 16 miles tomorrow and 17 next Saturday...and 18, and 20, and 22, etc...in July and August. Blah. Why do this to myself? I don't have to do this.

I also know, at least rationally, that running in the heat will make me stronger and faster in the fall. Last summers article in Running Times, Myths About Running In the Heat, looked at a study of heat-trained cyclists and observed that:


"Across the board the heat-trained riders showed gains in the measures all runners hope to improve: VO2 max, lactate threshold, maximal cardiac output, maximal power output and 1-hour time trial performance. Yet the only piece of the training that varied was the exposure to heat. The magnitude of the effect was similar to altitude training."

So, my rational mind knows that it's good for me, running-wise, and if proper precautions are taken it can be safe - but I can't seem to escape the soul-killing suckiness of running through the Colorado blast furnace.

Perhaps in the fall I will reap the benefits. For now I trudge on...

"To live is to suffer, to survive is to find some meaning in the suffering." ~ Friedrich Nietzsche