Is Running Bad For You? 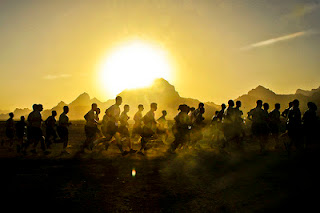 Ever since the untimely death of Micah True (who apparently died due to cardiomyophathy, an enlarged heart, which can be caused by something as simple as an infection, usually undetected - not necessarily due to running) and various sensationalized deaths around the country during marathons, the subject of whether running is good or bad for you, and how much is good and bad for you, has been a media and discussion board hot topic.

Never mind that more people die skiing or playing golf every year, or getting out of bed in the morning, or having sex... never mind that noise pollution increases our chances of having a cardiac event, even the yearly switch from daylight savings to standard time and then back again increases heart attack risks- No, let's ignore all of that and pick on running. For those who welcome another excuse to remain firmly ass-planted on the couch, this is music to the ear.

Stop running so much, the experts advise. You're killing yourself! 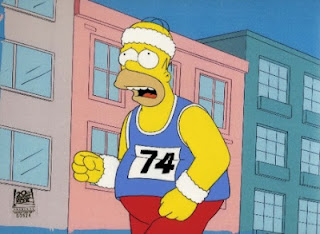 Most runners will take what the various fitness and health "experts" have to say with-a-grain-of-salt. We tend to be a fairly empirical group - that is, we take our experiences and we draw OUR own conclusions. Research be damned. Running makes us feel good, we have more energy, we're happy - so poo-poo to the naysayers.

I had this reaction myself the other day when a friend (and fellow runner) and I had a discussion about her husband's trip to the doctor for an annual check up. Her husband has been a runner for years and presently runs around 40 miles a week. He's run races in the past but currently runs, I assume, for the sake of exercise and sanity. His doctor told him that he is completely healthy. Doesn't need any tests. He's in tip-top shape. Then the doctor asked him how many miles a week he runs. When the response was, around 40 miles a week, the doctor immediately recommended that he cut back. He assured his patient that 20 miles a week is optimal for health and fitness. He brought up issues of wear-and-tear, and recommended that he split his exercise between running. biking, and swimming.

Okay. Enough with the wear-and-tear arguments. What's killing us in this country is this idea that if we use our bodies then they're going to wear them out. Joints DON'T wear out. Bodies don't wear out. Even Time magazine in "Is Running Bad for Your Knees? Maybe Not" acknowledges this, so it must be true! And in fact, the bulk of the research out there suggests that not using our bodies is what leads to the aches and pains that leave us sitting in front of the boob-tube day in and day out. When we walk and run (weight baring activities) our joints are bathed in fluids that keep them happy and healthy. Sure, running alone may lead to muscle imbalances (and most of us know that through our own empirical studies as well) but it ain't gonna wear anything out. And if you have a genetic predisposition to developing osteoarthritis exercise helps to stave off the debilitating effects. Use it or lose.

Next - Does running damage the heart? Well, it is true that a high mileage running event, like running marathon or ultra distances, does increase (temporarily) cardiac stress, inflammation and free radicals. However, those who regularly run higher mileage overall fair better in those circumstances than those who run fewer miles. In a recent Outside magazine piece, Erin Beresini writes:


"[R]unning 26.2 miles straight can have deleterious effects on muscles, elevating troponin and plasma CPK, indicators of muscle and cardiac damage, and C-reactive protein, an indicator of inflammation. Endurance runners face even greater risk of heart damage, outlined by the untimely death of ultrarunner Micah True earlier this year."

The claim and concern here is that the cardiac damage is permanent not just temporary. But I don't think it's good reasoning nor good science to draw general conclusions from the single case of Micah True. Many articles in the popular press seem to be promulgating this fear based alone on the story of Micah True. I believe this is irresponsible journalism. But more concerning, is the notion that some doctors are buying into it as well and unnecessarily scaring their patients.

Medical science does not know THE cause of cardiomyopathy.  I had a dog many years ago who died of cardiomyopathy. The theory was, and this was only an educated guess, that her heart was weakened by a case of Lyme Disease, which she was easily cured of with antibiotics but her heart had already been infected by the time any symptoms were apparent. But wait, she also ran 50 miles a week with me for years and years - perhaps it was all that running! The fact is, we just don't know what the exact trigger is/was, for my dog or Micah True.

In the new York Times article "Is Marathon Running Bad for the Heart?" by Gretchen Reynolds, it's clear that the numbers do not support jumping to extreme conclusions:

"What the researchers found was that, even as participation in marathon racing almost doubled during the past decade, to more than 473,000 finishers in 2009 from about 299,000 in 2000, the death rate remained unchanged, and vanishingly small. A total of 28 people died during or in the 24 hours immediately after a marathon, most of them men, and primarily from heart problems. (A few of the deaths were due to hyponatremia, or low blood sodium, in those who drank excessive amounts of fluid.) Those numbers translate into less than one death per 100,000 racers."

For the majority of people running, even running a lot, is safe.

Can I be "fit" running 20 miles week? Sure. But fitness, per se, is not the only aim for many runners. That was the argument I found myself making in response to my friend's concerns about her running and her husband's running. I even heard myself saying "I don't care about fitness - I don't run to be fit - I run because I want to run". And that's not exactly true, but I'm not a 'fitness' runner. Sure I like feeling strong but that's because it allows me to live a good and active life especially as I get older. But I also run for so many other reasons: spiritual, aesthetic, emotional, psychological, etc - and in many ways those outweigh all the concerns about fitness and health.