"The greatest good you can do for another is not just to share your riches but to reveal to him his own." ~Benjamin Disraeli


Last Monday, Memorial Day, I helped usher close to 50,000 runners across the finish of the Bolder Boulder, the second largest road race in the world - after Peachtree (and there's a goodhearted competition going on between the two). This race is a huge community event in Boulder - For elites, aspiring elites, competitive regional and local runners, first timers, kids, old-timers. people in tutus and superhero costumes, three-legged runner pairs (I saw at least a couple), parents with babies, parents running with their young children for their first race...You name it, you got it at the Bolder Boulder.

As I stood at the finish guiding 5 hours worth of runners across the finish, some in need of assistance, others looking for a high-five or a picture at the finish, I was struck by two thoughts: a) Lots of people puke - and if you've read some of my previous posts, you'll know that I have a fair amount of admiration for these runners and their ability to push themselves to that point; and b) I was struck by the feeling that these are MY people. This is my tribe. I got teary eyed watching moms hug their small daughters as they crossed the finish line hand in hand...as friends embraced...as lovers stopped to kiss. 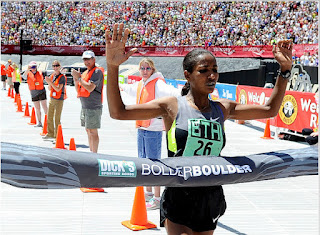 That's me standing behind Ethiopia's Mamitu Daska  as she raises her hands in victory at the finish line of the Bolder Boulder's Elite Women 10K race on Monday, May 28. (Jeremy Papasso/ Camera)

Now, if you've read some of my previous posts, you'll also know that I believe that getting everyone running (or as many people as possible) is the secret to world peace, eternal life and the good life. Okay, perhaps not eternal life, but I do believe that the world would be a better place if more of us got off our @#$es and started running.

So, next Wednesday, June 6th, is "National Running Day" (http://www.runningday.org/). This began as a grassroots effort on the part of the NYRR, and has gradually spread across the country. It's held every year on the first Wednesday of June. And, there are group runs held around the country.

So go find a run near you (see the link above) and bring a friend, or two, or three...bring your kids, your wife, husband, partner, mother, father, sister, brother, neighbor...someone...perhaps a "non-runner", and welcome them into the tribe. If there's not a run near you, make your own.

Ask people if they know that it's National Running Day. Spread the word and change the world...just a bit.


"Unless someone like you cares a whole awful lot, nothing is going to get better.  It's not." - The Lorax ~Dr. Seuss