Eating and Running and Living

"Think occasionally of the suffering of which you spare yourself the sight."  ~Albert Schweitzer


With the release of Scott Jurek's book Eat and Run the subject of veganism and vegetarianism and meat eating has become a hot topic among both runners and non runners alike. Jurek's book has already hit the top 10 (at #7) of the New York Times best sellers list it's first week out. Clearly it's not just runners buying this book. Its release has inspired some interesting conversations among runners both online and in person.

As I settle into a seat at the start of Jurek's book launching event in Boulder the guy sitting next to me asks, "So, what brings you to this event?" "Well" I said "I'm a runner and I've been a vegetarian for 30 years so I'm interested in hearing what he has to say." He responded "Wow. Thirty years? That was before it was even popular." Yeah.

Whenever the subject of diet and nutrition comes up among a group of runners, or anyone really, the views tend to be adamant and contentious. Runners, in particular, only seem to want to hear about the views of others if they actually ask a question. Otherwise expressing an opinion (backed up with reasons) gets us all bent out of shape. Those with strong views are seen as zealots and wing-nuts obsessed with food or their bodies, etc. Eat what you want and let others eat what they want, is the general position.

I don't think they they are the same. I've said many times before, that when my actions effect me alone, then I can do as I please. But, for me, when an action effects others, then it becomes an ethical issue. What we choose to eat effects others - human animals and non-human animals. If I purchase grapes harvested by exploited (mostly undocumented) migrant workers who are exposed to massive quantities of carcinogenic herbicides (because they are not protected by OSHA) then I contribute to the continuation of that practice. Likewise, when I purchase factory farmed meat I'm giving a thumbs up to the status quo.

When I met Scott Jurek last week as he signed my book, I thanked him for bringing this issue to the masses of runners. He is actually pretty clear that his main reason for his veganism is not strictly an "animal" issue, though he is mindful of that, but he just feels better and runs better eating vegan. I've only begun reading his book, so I will reserve further comment on his claims for later.

This is my argument, not his.

So what's the real problem with meat? After World War II meat consumption in the US increased dramatically. In response to the ever increasing demand, intensive rearing practices were developed making meat cheap and plentiful. Initially cattle were placed in feedlots, dirt enclosures, and fed corn. Corn is the most cost effective way to fatten cattle fast and cheap. The problem is that cattle can not digest corn. So, the cattle began developing massive infections. The solution was to include large doses of antibiotics in with their feed. Problem solved. Now large numbers of cattle can be raised in very compact areas on cheap feed. The epitome of capitalist economic model: Based on Cost Benefit Analysis alone this is a brilliant method. 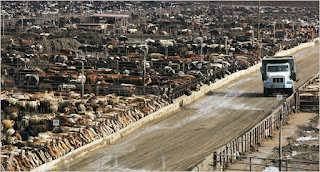 What do the critics say? Well, for one thing, this meat is not good for us. Consuming antibiotics in meat has led to the serious problem of antibiotic resistance, which is a scary deal if you ask me.

But, more importantly, what about the nonhuman animals? Do they deserve any consideration here? A general, and widely accepted moral principle is the principle of non-malfeasance: Not contributing the the harm of another (who can be harmed). Arguable, nonhuman animals can be harmed: They are sentient beings (can feel pain) and exhibit natural inclinations (chickens like to scratch). So, should we be acting in a way that contributes to their pain and the frustration of their natural desires when this treatment is unnecessary? Most of the meat that most of us eat today comes from factory farms. The principle of non-malfeasance would require that if we eat meat we should produce it in a way that minimizes pain and allows for at least a reasonably good life for the animals. This would require a complete overhaul of the systems and economic forces now in place.

And the question for runners is: Is it necessary to eat meat for the sake of performance? I don't think so, and I think Jurek offers a good example, though admittedly only one example, (and I'll offer myself as another) of the possibility that meat eating is not necessary.

It's really quite simple:


“If it is in our power to prevent something bad from happening, without thereby sacrificing anything of comparable moral importance, we ought, morally, to do it.”~ Peter Singer