You Can't Reap What You Don't Sow

Why All Children Should Run :) 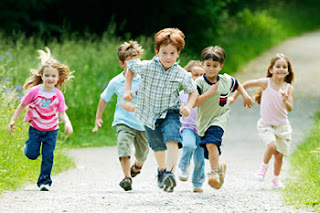 
It's final exam time, the bi-annual ritual where we try to measure, through imperfect means, what someone has learned. This time of year also ushers in the urgent pleas from students begging for clemency, compassion, leniency...While others express heartfelt gratitude for having the opportunity to learn something entirely new, sometimes even life changing and challenging.

One hands over her exam, hesitates and then says, smiling: "You're amazing, you know that. This class has changed my life." I'm only part of the equation and I'm not amazing - though that's nice to hear occasionally. But, ultimately it's up to her - it's up to all of us as individuals accepting responsibility for what we do and fail to do with our lives.

Moments later a student hands over his exam. Three out of four of the essay questions are blank. I spoke with him several days earlier and told him that if he did well on the final, he would pass the class. I suggested he talk with me about any questions he had while studying. The students knew exactly what would be on the final (75% of the final is directly from earlier exams). As he hands me his exam, he says "This is the best I can do." I look and immediately see all the blank spaces, and ask if he can't try to answer those. He does not take the exam back from me. Instead he begins telling me, with heartfelt seriousness and concern, that his life is in my hands.

Wait, how did HIS life fall into MY hands? And yet this is not an unusual refrain from students: "Please, I worked so hard. I have to get a 'C'."..."This class is going to ruin my GPA."..."This class is so much harder than another class I've taken."..."I'm going to lose my scholarship/be sent back to my country/have to stay at community college for another year..." and on and on and on... But rarely is there any recognition of how their actions are responsible for their situation.

So what sets the two situations apart? It seems that our culture emphasizes the importance of team playing over the importance of personal responsibility and initiative. But the fact remains, that ultimately we have our own lives in our own hands.

Aristotle argued that there are three necessary (not sufficient) elements if we wish to master something: Desire, Practice, and a Teacher: I must WANT to master the thing. I must practice, practice, practice. And I must have a "teacher". Now a teacher needn't be someone who actually stands before us and teaches us facts or techniques. Rather, a teacher may just be someone who exemplifies what it means to master the thing I wish to master. The best runners in the world are as much 'teachers' as a coach is. They are examples of what it takes and what it means to "run well". I can learn a lot from those who do something well. And then I must really want it, and work very hard at pursuing it.

Running illustrates this perfectly. No one can run your run for you. No one can finish the race for you. You either ran today or you didn't. You put in the effort and you hope to reap the benefits.

I've been coaching rock climbing for 15 years and running for 3 years - the number one lesson children (and adults) learn while pursuing these passions is: It's ALL up to you. I can help, I can encourage, but no one does it for you. You either succeed or fail in reaching the goals YOU set for YOURSELF, and then YOU do it or YOU don't do it. When you play a game of soccer it is possible to win the game even if you don't contribute much to the effort. But that's not the case in running.

I've been coaching an elementary school running club for several weeks. Lots of what we do are running games, keeping it fun. But last week we began heading out into the neighborhood for a mile run. The kids range in age from pre-K (several of the coachs' kids, including my own) to 5th graders. Some of the kids are new to the running thing, and some are already accomplished racers. But what you see is a lot of effort, some jogging, some walking, but they all get there, and when they do they are glowing with pride - the feeling of individual accomplishment.

No one did it for them. No one can do it for them. And I hope they carry that feeling for the rest of their lives.

Go forth and sow some seeds, set an example, work for the goal, enjoy the ride, and have patience...


"Patience is necessary, and one cannot reap immediately where one has sown. "~ Soren Kierkegaard