So Here I Go Again!

"Twenty years from now you will be more disappointed by the things you didn't do than by the ones you did. So throw off the bowlines, sail away from the safe harbor, catch the trade winds in your sails. Explore. Dream. Discover."
~ Mark Twain


Three days after running the Boston Marathon I went for a short, easy trot around Walden and Sawhill Ponds in eastern Boulder. This is one of my favorite places to run during the spring because it's a wildlife refuge, so there's lots of baby animal sightings. That day I posted on dailymile : "Easy, no watch run. It's so good to run for no other reason than to run." And for an entire day, it seems, I was completely content to have nothing planned in the near future. And then there was the next day...

When I was 7 years old my family took a trip to our ancestral grounds: Ireland. On that trip we did what we always did when traveling: We found a local stable and went out for a horseback ride. It was something that my Dad, sister, and I always did. The Irish country byways, cutting through rolling emerald hills, is ideal for riding, and the Irish take horseback riding seriously. 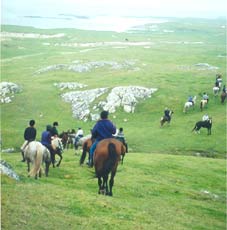 Well, as we rode along, my horse got spooked, stumbled, and prompted bucked me off and onto the ground. I remember landing hard on a small boulder sticking out of the ground. I sat there for a second and then immediately remounted. I know I cried a bit, and I know it hurt a lot, but what else could I do. As we continued on down the road I heard our guide quietly comment to my father about my willingness to get right back on the horse.

A year later we were in Switzerland, riding again. I was small for 8, and they put me on a huge horse who was apparently the most gentle of the lot. This time my horse took off on me. I remember holding on for what seemed an eternity, racing through the trees. My father chased after me. When my horse finally stopped, and my father caught up, his head was bloodied by the lashing of branches he hit during the chase. I was unscathed, and eager to continue our ride.

What does any of this have to do with running? Well, after the Boston blowout I feel the need to get back on the horse, sooner rather than later, and hold on tight for the wild ride and see what happens. I have this annoying feeling that my whole training cycle was 'wasted' on nothing more than a mediocre training run (Boston) - though, of course, I know that that does not do the experience justice.

But as I've said in earlier posts, I want to run Boston again and I didn't get a qualifying time. Since I hate the heat (summer) and my next planned marathon is NYC in November (which is after Boston 2013 registration), I'm faced with either trying again now or waiting until 2014 (at least) to run Boston again. Well, I'm no spring-chicken, so I hate putting things off for later.

So why not throw caution, and good sense, to the wind and try again now?

I signed up for the Brookings Marathon in Brookings, South Dakota, on May 12th, less than 4 weeks after Boston. Foolhardy? Probably. But then again, who knows. I know I'll learn something, but I don't know what it will be yet. Will I get my BQ? Dunno. Will I be recovered? Dunno.Whatever happens, happens...

And then I woke up in the middle of the night wondering what the hell I'm doing to myself. My friends greet the news with shaking heads of disbelief. They're baffled. I'm baffled. And so it goes...


"We must walk consciously only part way toward our goal and then leap in the dark to our success. "
~ Henry David Thoreau