Equal Rights For Runners On The Road!

“I know, up on top you are seeing great sights, but down here at the bottom we, too, should have rights.” ~ Dr, Seuss, Yertle the Turtle 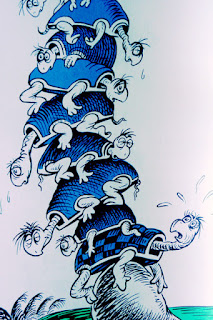 Yesterday morning while running through a quiet neighborhood along a narrow, twisty road with a posted 20 mph speed limit, I was nearly run down, and most certainly run off the road, by a speeding vehicle heading my way. I ALWAYS run against the traffic - and I'm convinced that this has saved my life several times. The driver and I made solid eye contact as she bore down on me. She clearly had no intention of moving away from me. I jumped into a bush and stood there on the side of the road in disbelief as she zoomed on down the road. In huge letters across the entire back window of the car was "USA Pro Cycling". Now I was just really really really ticked! A cyclist!! A cyclist running down a runner!!!???

Last year while training through another snowy winter in Colorado and battling it out with the cars on the roads (since the trails were fairly impassable for most of the winter), I made the observation that cars were giving a lot more room to the cyclists I saw on the roads than the runners. Even more vexing and infuriating, I have had numerous encounters with large groups of cyclists also pushing me off the road and into the ditch. Now, granted, my "observations" may suffer from a bad case of "hasty generalization" (insufficient sampling variety) but after 40 years of running I feel somewhat qualified to at least comment on the issue: So here goes...


~~~~~~~~~~~~~~~~~~~~~~~~~~
First, it is NOT my intention to stir up animosity between runners and cyclists. I do ride (usually when I can't run ;) and so I believe that cyclists deserve the protections they legally have. But I believe that these same rights ought to be extended to runners/pedestrians as well. The arguments used to support legislation protecting cyclists apply equally to runners.

In 2009, Colorado joined a national trend to pass laws aimed at protecting bicyclists and educating drivers. The "3 Foot Law" , requiring motorists to give cyclists at least a yard of clearance when they pass. The Colorado law also makes it illegal to throw objects at riders. Law makers and riders applauded the measure. 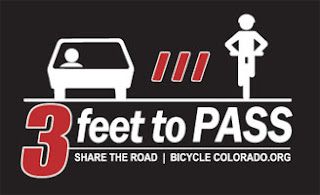 "The members of Bicycle Colorado are excited that the Bicycle Safety Act will go into effect on August 5, 2009. Here's what this new law will mean to you while biking or driving.


3 Feet: Enjoy a Little Breathing RoomBicyclists get at least 3 feet of space when vehicles pass. To help give you 3 feet, motorists can cross a centerline when clear to pass you safely.

Riding with FriendsTwo bicyclists may ride side-by-side when clear but please move to single-file to allow other vehicles to pass.
Be Safe, Be Seen
Ride as far right as is safe. But that doesn't mean you have to ride in the gutter - riding in the right half of the lane often is the safest and most visible spot.
Go With the FlowYour choice - bicyclists can ride to the far right or far left on a one-way street. Remember, still no riding upstream - ride in the same direction as traffic."

So I started thinking about why or if this law applied to runners. So, I contacted Brandon Shaffer, President of the Colorado Senate:

I'm doing some research on SENATE BILL 09-148 - I understand that this bill concerns Bicyclists only, not runners/pedestrians. I am wondering if you can direct me to any legislation concerning runners on public roads. I have been unable to find any sources other then general pedestrian laws.

Thank you for any help you can provide on this.

You are correct. SB09-148 applies to a bicyclist's interaction with other vehicles on the road.  It mentions pedestrians once, but it is in the context of how a bicyclist ought to interact with a moving obstacle on a road (which includes a pedestrian).

To the best of my knowledge, no bills have been introduced this year on runner or pedestrian specific issues.  The best place to find existing laws on this subject is in Title 42 "Regulation of Vehicles and Traffic."  More specifically, 42-4-801-808 contains pedestrian specific laws.
I hope this helps.
Sincerely,
Brandon
Brandon C. Shaffer
Senate President

After digging through all the bills concerning MOTOR VEHICLES AND TRAFFIC REGULATION, I found nothing beside the following:


"...vehicles are required to yield the right-of-way to pedestrians who are lawfully within adjacent crosswalks at the time a circular green signal is displayed."  http://www.state.co.us/gov_dir/leg_dir/olls/digest1994/MOTORVEHICLESANDTRAFFICREGULATION.htm


"A person riding a bicycle upon and along a sidewalk OR PATHWAY or across a roadway upon and along a crosswalk shall yield the right-of-way to anypedestrian and shall give an audible signal before overtaking and passing such" http://www.state.co.us/gov_dir/leg_dir/olls/sl2005a/sl_301.pdf


So now here it is, a year after I really began thinking about this, having survived another winter season on the roads, and I think it's high time something change. I'm tired of cars feeling that they are allowed to "buzz" me - and it happens very regularly. It's time that runners join forces to change this situation. Cyclists, at least in Boulder, have been very effective in joining together and using their numbers to influence laws. It's time for runners to do the same.

Now to get to work!

On May 8th I wrote to one of the sponsors, Sen. Greg Brophy asking about legislation concerning runners/pedestrians. Here is his response today, May 9th:


I have not heard from anyone about such a concern.  I need to ask our research team how pedestrians are currently treated on the road.