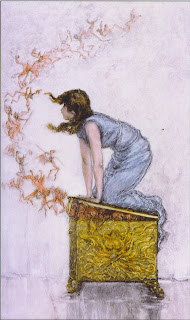 “There are a thousand thoughts lying within a man that he does not know till he takes up the pen to write.”  ~ William Makepeace Thackeray

It's been over a month since I've written anything...anything at all...and it's not for the loss of anything to say but rather all the things swirling around the drain of my mind and clogging it full of gunk. Around and around thoughts race through my head in great, tail biting circles. So many thoughts. So many things to say. Nothing gets out but garbled gobbly-gook.

After a very trying spring, emotionally and physically, I slowly began reclaiming myself. I never would have guessed that it would take me this long. So much yearning remained unrealized, unquenched. What to do with it all - with all that yearning.


“The swallow that hibernates underwater is a creature called yearning.”  ~ David Quammen

I became like Pandora desperately holding the spirits in, not because they are evil, but because they are all just too much or too untamable - obstreperous little beasties. And yet in reality it is I who was shut-up in that box. I peaked out from time to time, a slice of light burning my eyes, quickly shutting the top afraid something essential might slip out.

And yet all that bottled up gunk struggled to get out and pushed and pulled and poked me in the eyes. And I held tight to the lid against the unruly beasts of my own making.

In May I left my teaching job of 16 years (ah, the fear and trembling!), and I thought, in all naive innocence and wide-eyed excitement, that this would somehow liberate me - body, mind, and soul to follow my proverbial bliss. But alas, that only began the insanity as I threw myself head first, with great gusto, into the trials and tribulation of growing a new business, pursuing ongoing educational opportunities, and training for my first 50k. All of this left me frazzled.  And wanting...wanting more...yearning...wanting it all NOW.

“The ancestor of every action is a thought” ~ Ralph Waldo Emerson

And during this time I did force myself from the box to do and not merely think. I ran the Estes Park Marathon, which remains a blur of unthinking doing, and quietly kept plugging away at my training. Then last week I went through an intense week of USATF training - something that demanded a different part of my brain and body - and through all the sleep deprived stress of that week something was pulled away from my eyes. I noticed something as I walked to my biomechanics exam - completely terrified of failing - I realized that I was completely THERE again. Why then? I don't know. Perhaps a yearning was satisfied in the challenge that required doing. And the box burst open on that cool morning in Hayward, CA. And my beasties did not flee. They stayed by my side and I made peace with them. For now...And I did not fail.

Often the hands will solve a mystery that the intellect has struggled with in vain.  ~Carl G. Jung

And now I realize that all that thought was necessary - all that being stuck in my own head had a reason. It's happened before and it will happen again, but you never really recognize what's happening until it is past.

Running is, in essence, a solitary endevour, even when we run with others we are ultimately on our own and it is all up to us (I can't help but notice that it is a lot like dying in this regard). We can use others to help us through this aloneness (and I don't mean loneliness) and they may serve to distract us from this nature of running, but it either happens because of us or it doesn't. And this is what makes running both liberating and terrifying. It's completely in our own hands.

I think we all go through these phases of turning inward - and they are necessary and regenerative - but at the same time they feel somehow wrong and alien and disconcerting. And yet, like any metamorphosis, we emerge a different person in some important respects. But the fact remains, that that metamorphosis is somewhat painful, unnerving, disorienting and weary-making when we are in it's midst.
My 50k, Great Cranberry Island, is now a week and a half away and I can actually imagine doing it now. Perhaps I needed that to hit me before all the bottled up stuff could be set free. Or perhaps I'm open to the thought that it might reveal something I do not yet know...

“I know well what I am fleeing from but not what I am in search of.”~ Michel de Montaigne

Appendix: It was brought to my attention after publishing this that my title sounded like something written by David Quammen (who I'm afraid to say I've never heard of - hate to have to admit these things), and so I will give him credit (and edited above with said quote) instead of changing the title. Though I didn't get it from him, he said this first - so I'll credit him for sending it out into the ethers, where it must have seeped into my gray matter. So be it. I see these yearning creatures much the same as the wild things, gnashing their fearsome teeth.
at July 16, 2013