Ramblings of the Dazed and Confused 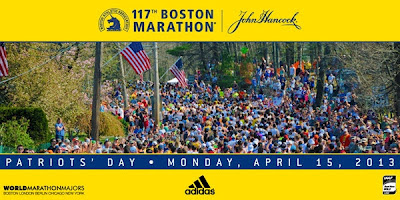 Well, this week I finally received my official registration confirmation from the BAA for the 2013 Boston Marathon. Things got fairly confused because they had me down as running a qualifying marathon that I did not run, and did not have the one I did run. May the weather be better than this year because I don't know how much more of this I can take.

And today I finally woke up to the fact that I'm a little over four weeks out from NYC. So I started thinking about what I want to do there in a more concrete sense. Ideas have been randomly bouncing around my brain since Fox Valley three weeks ago. After that race, having accomplished THE goal (the BQ), I told myself, "Oh goodie. Now I can go run NY for the shear fun of it." And yet...

I told the tale, a couple posts ago, of my desperate (fairly pathetic and unpleasant) experience qualifying for Boston by 7 seconds. That race put me in a somewhat manic state for at least a week, and I'm not sure I'm back to normal yet - or will ever be normal again - after that last three miles of torture - internal angst of battling one's inner most demons of suckiness and weakness and the give-into-it monster. My sleeping is a mess, my eating is all off, and yet my energy level seems to just keep on ticking along. I'm waiting to crash and burn in a firey ball of exhausted hungry hollowness...but it isn't happening...yet. Wrangling with that beast left it's mark in a way I'm just beginning to grasp.

I thought I was seeking an 'easy' marathon like the one I ran for my first BQ. It was 'easy' in the sense that it felt 'on' and almost effortless, and I've been craving that fix ever since. What I didn't realize was the effect this last one would have on me. It's not the easy ones that change you, it's the hard ones that push you to the mental edge.

Now this weekend I'm running another marathon, 'just as a training run' - Oy! - and that has consumed a considerable amount of my mental attention (clearly this is not actually just a 'training run'). Simultaneously recovering from one marathon and rebuilding for another marathon (NYC) while throwing another one into the mix "just for kicks" (haha) is a little disorienting, to say the least. And at times I start questioning my sanity (as others seem to be doing more and more regularly). And yet I am feeling more jazzed and optimistic about life than I have in a while. So I must be doing something right.

And so NY has remained on the back-burner of my mind. Until today. Why today? I know not why, but today NY came into view with a ferocity I was not expecting, nor really welcoming. Maybe it was getting the official thumbs up from the BAA, maybe it is that I've been running a lot lately and feeling surprisingly good, all things considered. I don't know. But something broke loose and thoughts started flooding in...Thoughts I was trying not to have.

Based on my time at Fox Valley, I'm pretty sure I'll be in the third wave at Boston. This year I was in the first corral of the third wave (so, very close to the time needed to get into the tail end of the second wave), and I so wished I was in the second wave primarily due to the heat and the rapidly rising temps. By the time the gun went off for the third wave it was well into the 80s and the sun was high and hot and the air was thick with steamy moisture. I'm aware that the chances of another record breaking hot Boston is unlikely, but for some reason I just really want to get a better position.

What does that mean for NY??? Well, my wave/corral for NY is good. I'm up front in Wave 2, which is right after all the fast folks (this was based on my qualifying time, which I am nowhere near right now! But I'll take it) and so it might actually be a race-able situation. Perhaps I can get a better time and then a better position in Boston. So maybe I should go for broke, and really run this thing after all...But wait. This was supposed to be for fun...Fun? And I could completely blow up anyway. I wanted to avoid this pressure. Why do this to myself? Whatever...And so it goes.

And...so it goes. I will, no doubt, go back and forth on this over the next few weeks. Frank Shorter famously said, "You have to forget your last marathon before you try another. Your mind can't know what's coming." and he might just be right about this. And yet...
at October 04, 2012