"Adopt the pace of nature: her secret is patience." ~ Ralph Waldo Emerson 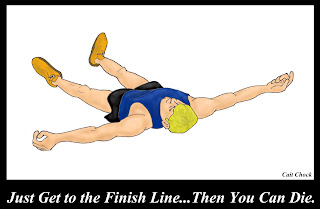 This may be how we feel at first...and then two days later...???
I believe that there is a dirty little secret kept quiet among marathoners who have done a few and feel a little less terrified by the prospect of training for, running, and recovering from a marathon - and that is, that running a marathon can actually really feel like it's getting in the way of running when you want to run. Sure there's all those miles of training, and long runs, and the actual race itself, but then there's the blasted taper and worse of all, the recovery.

The internet, blogs, discussion boards, facebook running groups, etc., are all chock-full of sage, stoic, and often deceptive, advice concerning how much to taper and how long to recover. What many experienced runners forget are those early marathons where they couldn't run a step for a week or more. We dole out advice: "Go for a little walk/jog the day after. It helps with recovery, getting the blood moving and the muscles warm". Well, isn't that just dandy!!!?? That may work if you can actually walk, but guess what? You may have a REALLY hard time doing that. And so those newly inducted into the marathoning tribe begin to worry: I can't run. I'm going to lose everything. Worst of all, why can they do this and I cannot?

Online training logs such as dailymile can make this worse. We see what others are doing. We compare, we contrast, we worry that somehow we just don't measure up.

After my first marathon I felt great. I was young and stupid and pig-headed (still am everything but the 'young') and so I went out and ran an 'easy 10' after one rest day and ran 50 miles for the remained of the week. By the next week I was hobbling around with a killer case of achilles tendonitis. The grinding inside that tendon felt like someone had replaced it with sandpaper. It took months to recover from that. I couldn't run and I swore that my marathoning days were done. One is enough. This just isn't worth it. I want to run! The marathon got in the way of what I really loved: Just running.

That was in 1993, and I kept my word for many years, until 2009 when I ran my second marathon. Now, I was considerably older, but unfortunately not much wiser. This race was hot and tough. I went out too fast, didn't drink nearly enough, and only drank water (no GU or anything of the sort!) and completely cramped up by mile 19. I was on pace for about a 3:30 and finished around 4:30! Yup, that's right. The last 7 miles were a death march. In retrospect, that was my most valuable learning experience, but at the time I swore "Never again"...again. And the recovery? Well, after a dehydrated 7 mile cramped hobble through 80+ degree temps, I was left a pathetic shadow of my former self, barely able to walk for a week. Please. Don't make me step down a curb. I just can't do it.

Then came 2010, my third marathon - the Colorado Marathon - I went into training with some calf tendonitis - but hell, I was already registered so I doggedly pushed forward. It was a bother but didn't really interfere with the miles, though the quality of my runs was total crap. As my mileage built it got worse. Then I hit taper and breathed a sigh of relief. Surely, it will be all gone by race time. But in fact it only got worse during the taper. I lined up at the start feeling nervous that I might end up stranded somewhere in the canyon. But I did make it to the finish, though it was rough. The worst part, however? I couldn't run a step for WEEKS and probably wasn't really back at it for several months. I would try to go out for walks and I would get shooting pains through my calves. It felt like my right tibia had snapped in two. I swore to the gods, at last I've learned my lesson. Really and truly this time. I'm done! Done I say!!!! Shaking my fists at the sky. Marathons are just not for me.

So, now I read the advice doled out by others with a bit of skepticism, a hyper-critical eye and a tinge of disgust. Much of the advise is dubious at best and injurious at worst. Telling a first time marathoner that they should be ready to run a couple days after their first marathon is foolish. Everyone is different. Lots of marathoners boast that they never feel sore, or never feel they really struggled/hurt in the race and so they feel fresh and ready to run shortly after the event. That's all well and good, but in my opinion, it also means that you didn't try very hard in the race. For a first time marathoner, someone who really gave it their all in the race, they are going to be a hurting unit for sometime, and telling them otherwise is unhelpful at best. 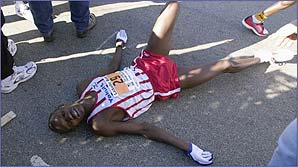 Many elites take a week or two completely off from running after a marathon. I know of many accomplished and experienced marathoners who schedule vacations following marathons so that they; a) are more likely to rest (running-wise) and, b) are out of their normal environment and away from the usual cues that make them want to run and feel guilty if they're not.

Those with lots of experience, and lots of years of running miles and miles and miles, week after week, year in and year out, will respond differently than those who are: a) new to marathoning, and, b) still pretty new to running (and by this I mean anyone who has been running either less than 25 miles a week or less than 3 years, and I'm being generous here). Those of us who have been around the block more than a few times need to be very careful about what we say to the new members of our clan, lest we make them feel weak, inadequate, and just not tough enough.

The number one concern I hear from newer runners is that they are afraid they will lose their fitness. This fitness that was so hard-earned, will melt into flabby jello in the blink of an eye. But what we often overlook, is that running fitness is not just about what I do this season, or this training cycle, but what I do over years and years of consistent work. Yes, sometimes that is interrupted with a forced or voluntary break: injury, illness, lack of motivation, pregnancy, life stresses, whatever. But the fact is that over the years we build on what we've done, even if we take some short breaks. There's no quick route to this sort of base. It happens over time and you can't rush time - nor should you want to. With training you make a deposit in the training bank, and that remains there to build on in the future - the experience, the mental trials and tribulations, the willing and succeeding - those will never go away.

And, on the other side of the same coin is the emotional stuff that follows achieving a goal that you've been working towards for 4-5-6 months. Considerable energy and attention has been focused on this goal. And then, bang, like that, it's done. Suddenly you are left hanging...abandoned...alone. What ta do, what ta do...What's next? You are left feeling purposeless. And being unable to run seems to amplify this loss. There is a period, following the completion of a major goal, where we almost go through a type of mourning. It's natural. Recognize it for what it is. Be kind to yourself. This too shall pass...

And so, when your body is ready you will get back to it, but now from a different starting point - and now, hopeful, fresh AND stronger in both mind and body.


"Patience is bitter, but its fruit is sweet." ~ Jean-Jacques Rousseau