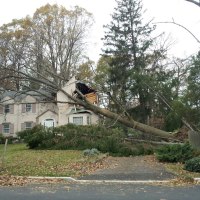 In my mind's eye I never actually saw myself running the New York City Marathon. I never pictured myself running across the Verrazano-Narrows Bridge, through Brooklyn, over the Queensboro Bridge, up First Avenue...into Central Park...I never saw this happening - me there - and this bothered me - and this should have told me something - and it did, but I didn't want to listen until after when I had no choice. Now I understand why.

Last week I wrote about how I was grappling with the whole issue of whether or not to run. I decided to go and do what I could, for my family and for any others I might be able to help - and maybe run as well to show my support for NY and NJ. The ideal and the reality unfortunately did not match.

2:30 p.m. Thursday, Nov. 1st: I'm sitting at DIA waiting to board my flight to NJ. My sister texted me earlier that morning saying that she couldn't find gas, and had no way to fetch me from the airport. I did a little digging and had some idea of one bus that might be running, or might not, to Plainfield, where I would be deposited on the dark streets at midnight.

I haven't heard from my sister since that earlier text and can not seem to reach her. Cell service is down and has been since Monday night. I get on the plane and have no idea how I will get anywhere. I really don't want to get on this plane. What the hell am I doing? The mood on the plane is grim and resigned. Everyone wears the dread of flying into this disaster plainly on their faces. No one knows what's ahead.

As the plane descends toward Newark, I see the lights of Manhattan out the windows and the darkness of New Jersey below. I decide to rent a car since it's really the only way to get any gas. The Enterprise lady and I go from car to car looking for one with some gas. We finally find one with a little over half a tank and I head off into the darkness. My family still has no idea where I am, or how I will get to them. I'm texting friends, some 1000s of miles away, telling them what I'm doing to stave off the feeling of being absolutely alone in this. Someone, somewhere, knows where I am, so I can't be lost, even though I am feeling completely and totally lost and alone.

Driving through the darkness of Route 1, I'm having a hard time getting my bearings. I've driven down this road 1000s of times, and yet I'm really not sure where I am. I pass a five mile long line of cars terminating near the NJ Turnpike junction, waiting to get gas at a Hess station. At this point it's about 11 at night. The streetlights are dark. The stores are dark. The traffic lights are dark. The only light comes from the flashing police car lights at every intersection. And car lights weave through the eerie emptiness. The air smells of smoke - perhaps fireplaces used for heat. Perhaps smoldering houses that have burned to the ground.


Snow Patrol is playing on my Ipod..."Please just save me from this darkness"...

As I get off the highway things get even more confusing. There are lines of cars everywhere but no lights anywhere. Where are they all going? Intersections are closed and parking lots become thoroughfares - the only way to get to where you need to go. And little by little I make my way in the general direction that my internal GPS tells me to go. Eventually I find myself pulling up in front of my mother's house. I turn off the car, climb the steps, my mother opens the door. We hug. And I cry. 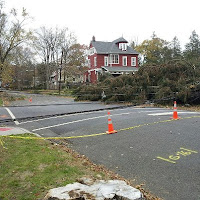 Friday, Nov. 2nd 8:30 a.m.: My sister drives me to Plainfield to catch a bus to Manhattan. This is the first day of any bus service. The bus is 45 minutes late. We weave our way through neighborhoods in shambles. The bus drops me at Port Authority and I make my way to the Javits Center to meet my friends Esther, Leslie and Barb at the Expo. Manhattan appears entirely normal. Bustling and happy. It's jarring for me to see this having just crossed the Hudson from NJ where nothing is the same.

Now for the past couple days the internet and media have been attacking the NYRR, Mayor Bloomberg, and the runners. We are depicted as selfish. We don't get what's happening to people and their lives. We just want to run some stupid race. And the runners and the race become the focus for all the pain and loss that people are suffering and all that is wrong with the relief effort. It's the runner's fault. THEY are why people are still suffering. Just look at the generators, the resources they are using?

The expo feels like any other expo I've been to. I'm not so into the expo thing but it is good to hangout with friends and to feel that someone in the world doesn't hate me. And so it goes, and we make our way back to Port Authority through to the seeming normalcy that is mid-town. I'm feeling a little better, but it doesn't last long.

And I get back on the bus and head back to the third world that NJ now is. And then sitting with my mother, my phone dweedles at me. My friend Sandra, in Illinois, sends me a message that she just heard that the marathon is canceled. I chuckle and respond, "Well I haven't heard anything". I turn on the news. They are reporting that the electricity has just come back on in lower Manhattan. "ABC News - it's on now" she messages back. I switch the TV to channel 7, and there it is - breaking news - Mayor Bloomfield announces that the marathon is canceled. I call her and start cursing a blue streak...

And why is it really canceled? Because of the animosity and violent emotions irrupting among New Yorkers. 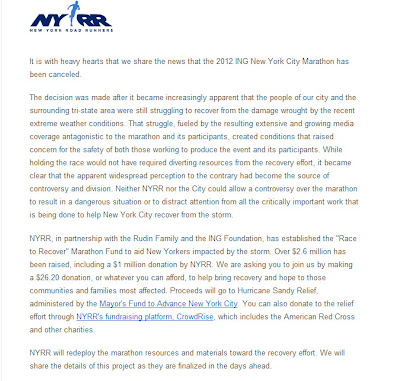 The reality, that this event was canceled due to concern about runners's safety is what is so unfortunate. This race has always been about the people of New York! And the fact is that many of us were feeling very nervous about our safety. Would we be booed? Would people throw things at us? And the hatred I've felt from people I don't even know, across the country and even more sadly, from New Yorkers is difficult to absorb and process. That's where I'm at now...I'm not sure right now that the New York City Marathon will ever recover from this. And I'm not sure I ever want to run it.