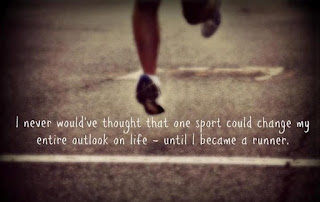 "To know you are one with what you are doing, to know that you are a complete athlete, begins with believing you are a runner." ~ George Sheehan

I spent this past Saturday in Estes Park, CO at Terry Chiplin's beautiful running camp Active at Altitude. attending an "Active Mind" workshop which Terry will be bringing to marathons across the country with his Active Mind Race Camps. At the workshop we explored some ways to redirect and refocus the helpful and not so helpful self concepts that we carry with us throughout our days and nights.

Several of the participants expressed a nagging feeling that they aren't 'real runners' or runners at all. This seems to be a constant refrain - Oh I'm not a 'runner' I just run...or some such nonsense. The usual grounds for such claims are: They feel that they're not running enough, or don't race, or have never run a marathon, or don't run fast enough, or haven't been running long enough, or are too old, or have the wrong body type, and on and on and on...To all of these I say piffle.


"There's a level of commitment and a desire to make running happen even when it's difficult. Runners want to run. Runners enjoy running. Oh, we all have those days when we just don't want to do it - but we do it anyway - and once we do, we usually (but not always) love it. Runners run as an end in itself, not as a means to an end only. Sure, some runners run to lose weight, or for their health - but true runners keep running after they've lost the weight (or haven't) and feel healthy and strong. Runners sometimes run when they're sick or injured, even if they shouldn't. Runners run in the rain and the snow and the cold, and realize that it's actually always great weather for a run. Or, they might suck it up, and run on the treadmill, if there's no other way to get their fix."

However, going to the workshop this weekend made me realize that some recent experiences have upset my world just a tad. They've made me more nervous and uptight about my training. They've left me feeling that I need to compare myself to others. They've undermined what I know I really believe and my pure enjoyment of running. And when I think about it all, and the resulting feelings and reactions I've allowed in myself, I recognize that, in fact, they've pissed me off and made me question my own understanding of me as a runner.

Earlier this summer I spent some time in the company of many, many elite professional runners, some Olympic marathoners and very serious amateurs. At first I felt that somehow there was some sort of mistake - 'Um, I don't think I should be here. Why was I invited?', I thought silently to myself. My running resume just didn't measure up. I immediately felt like an impostor - a fake - What if everyone finds out? I may be a "Marathon Maniac" - I may be a 'runner' of 40 years (or that's what I've always thought), but I'm just not very fast - at least by the standards of some - and the disparaging comments (which I do believe are not meant that way) creep into the discussions without some (fast runners) even noticing.

Well, I did my best to fit in and I can hold my own pretty well concerning my knowledge of training and physiology, and my experience with my own running and working with other runners allows me to put on a pretty good act, even if I can no longer run the paces I once considered respectable. I learned so much new and I also learned that I have a pretty good handle on a lot of running stuff. But then there were the little comments thrown in, almost in passing, and these words started borrowing their way relentlessly into my soul like termites eating away at my confidence.

It was simple, and common, and I've heard these things a million times and this time it got to me: Claims that those running over 4:00 marathons probably shouldn't be running marathons - Claims that someone running an 8:30 per/mile pace for a marathon is really a 'glorified jogger'. I wanted to run away and hide...or better, jog away and hide.

God, I hope no one knows how slow I am, I thought to myself.

I wish I could say that I'm over that, but the truth is, I'm battling it right now. I believe that I'm a runner. But the naysayers got to me and I hate it.

Then today I read something that really made me angry...

At this point we've all heard about Paul Ryans bogus marathon PR claims - and I'm not going to go on about that other than to say that lying matters to me - Instead I'm going to focus on some of the comments with respect to his claims.

In the BBC piece "Paul Ryan Marathon Claim: Would You Fib About Your PB?" by Finlo Rohrer http://www.bbc.co.uk/news/magazine-19462506  David Castle, editor of Running Fitness magazine suggests:


"When we talk about runners becoming proper runners, [it might be] under 3:30 [for a marathon]...Who wants to say they ran four hours? It's an OK time but not a runner's time."

Seriously? I'm sorry but this guy needs to get a life and a clue! I've been running for 40 years. I run every stinking day (minus one rest day a week - though I did have a 3 year running streak back in the 80s - and no, that probably can not be verified unless you want to look at my running log which could have all been fabricated). I run in all weather. I run when I'm sick. I ran through my whole bloody pregnancy (Ya done that Mr. Castle?). And, I was back out every day, with baby in tow, 5 weeks after giving birth. So, this tool is going to tell me I'm not a runner!!!! Yeah, this pushes my buttons. Yeah, I'm feeling a little defensive.

But worse, for many runners, it eats at them, it makes them feel silly and fake - How silly is it to work so hard for such slow times? How silly to spend so much time doing something one obviously sucks at? How can someone justify all this time and effort? These disparaging comments, arbitrary measurements and restrictive definitions of what it is to be a runner are pointless and irksome.

Well, it's really quite simple: I love to run. Period. That makes me a runner. Period. I am a runner.