Confessions of a Born Again Racer


Driving home from my 10k this morning I had the uncomfortable, though necessary, realization that I will have to work a lot harder to accomplish what I want to accomplish than I had to work 20 years ago. Perhaps my memory is skewed. My recollection is that in my 20s I did not work super hard for a sub-40 minute 10k. Now, I know I did work for it and I raced a lot, but I didn't work really hard and my training was somewhat haphazard. Now 20 years later I feel just as strong physically, and stronger mentally - but it just seems that I'm falling short of what I want to do.

I took a long hiatus from racing - from about the time I was 27 until 45! I still ran a lot, but I focused my athletic energy on rock climbing (which, quite honestly, I'm probably naturally better at). The truth is that I got burned out on racing in my 20s. I put too much pressure on myself. I started to hate racing and the anxiety it brought with it. And just like that, I quit. I never looked back...until my mid-40s.

After having my daughter (at the ripe old age of 43) I developed a tenacious case of calf tendinitis which didn't seem to respond to any sort of treatment (my theory is that it came from pushing the baby jogger 50+ miles a week). My PT recommended an MRI to rule out any tears - and the results of the MRI were grim. I was told by the very nice nurse on the other end of the telephone that my running days were over. Bamm. Fini.

Like that, I'm standing in a store and someone tells me that my life as I've always known it is over.  Like that, I am no longer a runner. Like that, everything around me begins to blur, literally, and I think that I might just collapse, right there in the store - and I don't care what anyone else might think. Like that, I am thrust deep into an identity crisis. Like that, some central part of me is given a terminal diagnosis.

Immediately, it occurs to me that there are many, many (running) things I have put off until later. I always had a picture of myself running until the day I die - or at least way into my senior years. There were races I always wanted to do...someday. But now what? Someday would never come. I always wanted to run New York - since I was a child - but now I can't, ever.

For the next few months I vacillated between feeling inconsolably depressed and resigned, to feeling stubborn indignation, determined to make sense of what made no sense. Perhaps it was just wishful thinking, I chided myself. But the fact remained: My knee didn't hurt.  And so I set off to find some answers that did make sense. However it turned out, I just wanted it to make sense.

What the orthopedic surgeon at Stegman Hawkins in Denver told me, is that my knee wasn't the problem. Oh sure, my knee was/is not perfect. Sure there's small tears, and some thinning of articular cartilage, and delamination (yum) etc. but those things are asymptomatic. He said that after the age of 30 most of us don't really want to know what's going on in our joints: Our knees, our backs, our shoulders, our hips - because those changes aren't causing problems, and they may never cause problems, but knowing about them can cause problems because we worry. 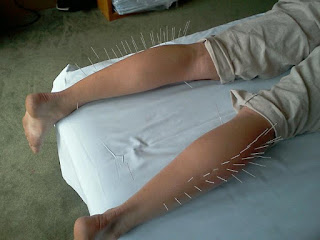 Ten months after this all began, I was running again - slowly. I had, quite by accident, stumbled upon a treatment (dry needling) that finally worked for me. The diagnosis that made sense: Tendinosis. The reason it made sense is that it was consistent with my symptoms and it responded to appropriate treatment.

And yet I feel I am running on borrowed time. I do worry.  Every time I feel the tiniest twinge in my knee I think: There it is, I'm done. It does cause worry, but it also drives me to do what I can while I can do it. And so I realize that I must work harder - and perhaps harder than I did when I was younger because, well, I'm older but I'm really not satisfied with using that as an excuse. I really do want to see what I have in me - what I can do. I never really pushed myself when I was younger, and so I must now or perhaps lose my only chance to see what I have in me. I am racing no one but myself and time and the desire to do what I can do while I can still do it. I will never again take this for granted. I wish I could have made my younger-self understand this. But perhaps that's just one of the lessons we learn along the way, if we're paying attention. Better late than never.