Reflections on Running and Motherhood

Sunday morning dawns like any other Sunday morning (a non-racing Sunday, that is). Sunday is normally my rest day - at least I don't run - which means I can sleep in a bit, and I'm always home to wake-up my daughter. After a leisurely breakfast with the family, I'm off for a couple hours of climbing at the rock gym. My husband and daughter join me a bit later. My daughter climbs, swings on the ropes, slides down the slide, dances around, and just has fun as I do some easy cool downs.

On this particular Sunday a large birthday party is in the making. The rock gym is a popular kid's party option. I recognize the birthday girl and her parents, though I can't quite place them. Over the course of the next 15 minutes, children stream into the gym. Before I notice, Sophia sees some of her friends - in fact, most of her neighborhood friends are attending this party of epic proportions. One friend invites her to join - but we do not really know the birthday girl - and Sophia has not been invited to the party. She gradually begins to sense that something is not right here. Why are all her friends invited? Why isn't she invited? For the first time ever, I feel like the worst mother in the world.

One of the moms, who is a friend of mine and the mother of one of Sophia's best friends, waves and tries to talk with me. I look her in the eye and say: "I hope you can understand that I need to get Sophia out of here NOW". She nods, understandingly, a tinge of pity in her eyes, as I whisk my sobbing 4 year-old away.

So what's the problem here? Why am I feeling like the worst mother in the world? Well, I am not your typical mother. Running sometimes, just sometimes, interferes with other activities - it sometimes means that my daughter and I don't do other things. Of course choices must be made constantly, but there is still this niggling concern that I'm somehow letting my daughter down and sacrificing her healthy and happy development all to allow me to squeeze in a couple more miles. Yikes, what could be more selfish, more unnatural!

I'm a fairly committed runner (if you tell me that I shouldn't go for a run I will kick you in the shin) and by some people's standards, I might be considered a 'bad' mother because I take important time for myself. Motherdom is full of martyrs. Though it's clear from the number of "mommy runner" blogs out there that I am not alone - yet, the question remains:  Can you be a committed runner and a good mother at the same time? Well, that all depends on how you define "good mother". 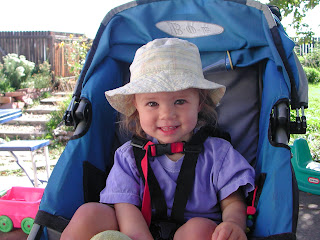 Sophia ready to roll. This is how we loved to spend our mornings.

My daughter is very aware that mommy loves to run - in fact mommy really has got to have her run. Perhaps it's the same for children of drug addicts - there's a kind of preternatural understanding that my daughter has. She doesn't question my desire/need to run - she sees this as natural - it's all she's known.  After all, she started running with me at 5 weeks old and I ran through most of my pregnancy.

Now here's the problem: One of the things (good) mothers do, that I'm really not so into, are playgroups. I would probably avoid them even if I didn't run, but running makes it tough to get to a 9 a.m. meeting without arriving a stinking, sweaty mess. When Sophia was younger, we were often out running together during playgroup time. Sometimes we would run to a playgroup, me pushing the blue BOB, Sophia reading and snacking and napping along the way. But I always felt that I somehow violated the other moms's sensibilities, or that I was a bit of a freak, an oddity - the other moms "Ooo-and- Aaaa" over my extraordinary feat of endurance and discipline - they often commented on how they could never find time to do such a thing -  I tried to fit in, but I just didn't.

I never really understood that this might be a big deal - at least for my daughter (I'm well aware of my own social awkwardness) - after all she's very social - she began school at 2 1/2 because she really wanted to go to school, and she has lots of friends. But on that Sunday morning I realized that running interfered with playgroup opportunities - and in American suburbia, playgroup culture is a big deal. Moms do "girl's/mom's night out", there's the group camping trips, and, of course, birthday parties. Sophia was not invited to this birthday party because I had neglected her playgroup social development. And here it was, for all the world to see. Oh, the shame of it.

Well, we all make choices. None of us can be and do all things, and so I must accept the choices I've made and make peace with them and understand that I am doing what I believe is best for my daughter.  I believe that I am setting a good example. I am taking care of myself and her. I want her to always care for herself as well as for those she loves. I want her to be strong, to pursue her passions, to decide how she wants to live her life. I do not want her to grow up to be a woman who sacrifices all of herself for others - that just hurts everyone involved.  I live according to my principles and values.  I'm not perfect, far from it, but I try my best - it's the best I can do - and I love my daughter to the moon and back.
at September 02, 2011