On National Coffee Day, and I love coffee, I want to announce a new national holiday:
National Take Your Daughter Running Day.

Hey, why not - I mean, who started National Coffee Day, or National Speak Like A Pirate Day, Arrrrr.

I say that this day should be October 1st - Which is this coming Saturday.

Why October 1st - Well, all runners know that autumn is the season of running (I think spring ranks second). We runners love the cool, crisp mornings, yellow and red trees bright against a gray sky, crunchy leaves soften each step and make us feel like kids again - Ah, running through piles of leaves. Each footfall releases the comforting, energizing, crispy aroma of fall.  And, while October 1st may not be the official first day of Fall, it still feels as though the passing of September ushers in Fall in earnest.

October 1st is also the birthday of Grete Waitz (1953) - and as a pioneer of women's running, I think this might be an appropriate honor.

There are disturbing tends at work in our culture (United States) that seem to be encouraging girls to sit back, passively and let life happen to them. It is our job to show them other, better ways. To discover and create who they are - who they want to be - to feel and know their power, their potential, their brilliance...

In a recent Christian Science Monitor article, Little girls or little women: The Disney princess effect, Stephanie Hanes notes that: "Girls are participating in sports at a much increased level in grade school," says Sharon Lamb, a professor of education and mental health at the University of Massachusetts, Boston. But, she adds, they start to drop out of sports at the middle school level when they start to believe that sports are unfeminine and unsexy.
The Women's Sports Foundation found that 6 girls drop out of sports for every 1 boy by the end of high school, and a recent Girl Scout study found that 23 percent of girls between the ages of 11 and 17 do not play sports because they do not think their bodies look good doing so.
And looking good, Ms. Lamb says, is increasingly tied to what it means to play. Star female athletes regularly pose naked or seminaked for men's magazines; girls see cheerleaders (with increasingly sexualized routines) on TV far more than they see female basketball players or other athletes...This "sexy babes" trend is a big one.
"For young women, what has replaced the feminine mystique is the hottie mystique," Ms. Coontz says. "Girls no longer feel that there is anything they must not do or cannot do because they're female, but they hold increasingly strong beliefs that if you are going to attempt these other things, you need to look and be sexually hot." 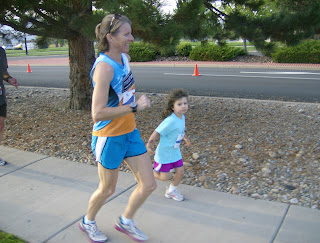 So let's all take our daughters for a run this coming Saturday - Let's show them another way - let's celebrate the energy and the magic of our girls. Let's help them discover that they are strong and can do anything they set their minds and hearts to.
at September 29, 2011