And another marathon season quickly approaches, and with it the anxious energy and anticipation begins to climb. The training ticks along as planned. Things are, generally, going great, you're making your runs, hitting your paces, which mysteriously (Not!) seem to be coming gradually down. Yeah, there are some days you're not as 'on' as others, but hell, there's still time to make up for those.

And week after week, you feel strong and do things you once could not fathom, and along the way there's an occasional bump in the road but you bounce back fast, physically and mentally. As time presses on and the weeks are crossed off the calendar, it starts getting real. And then you realize you're, oh, 7...6...5 weeks out. Taper looms ahead. And then, of course, the main event. And suddenly the stakes get very dire. Now every single bloody run MUST be perfect or doom is sure to follow. And though everything is still going well, as it has been, there comes that dreaded day, and...

Maybe you 'fail' to hit your tempo paces. Or, perhaps you hit them but it feels so hard. Harder than it has felt (conveniently fail to recognize the fact that it's a faster pace now). Harder than it 'should' be. Maybe that last long run felt harder than you thought it should feel.

And thanks to that one run you begin to question and doubt all those goals you set so many weeks ago. You wonder about the goals you may have refashioned to reflect the progress you've made. With that one run you forget all the runs where you felt strong, capable, fast...where the impossible became possible.

There is this thing about human nature, or at least runner nature, when it comes to training and goals and confidence: We often allow a few bad runs to outweigh dozens upon dozens of good runs. We fear that somehow things have taken a turn for the worse. And in one run, on one day, the whole thing is cast into question and a deep self doubt set in. 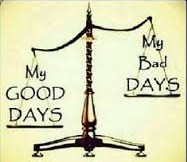 The one caveat here is if there is actually a trend showing up: Are you tired and sore and that doesn't improve with a rest day or two? Are you unable to hit your paces over several days or weeks? Is your resting heart rate elevated? Are you inexplicably gaining or losing weight...cranky...depressed, etc.? Then THAT is a sign that something needs to be changed and some blood tests might be in order as well. But one bad run? No. The doom and gloom alarms need not start screaming in your head.

If we can remember the good, the quantity and quality of which far outweigh the bad, then we avoid this unnecessary worry, or worse, nervous anxiety that actually can cause under-performance. You know the quote: "She believed she could and so she did.", well it's true to a great extent. If you allow one run to undermine your confidence then this could actually have a material effect on your training. The house of cards of training is held together by the strength of the mind and the will: Your heart (not the organ in your chest) but your spirit. If you allow the bad to outweigh the good when that is not really what's happening, then it becomes a self fulfilling prophecy: She believed she couldn't and so she didn't.

The fact is, we are not machines, we are humans, and we have good days and bad days. As I recently said to a runner: "This is not as simple as making a car go faster." We are more than matter and the variables that affect us are numerous and often mysterious.

Don't allow the few instances of 'bad' to overshadow the abundance of good, in running or in life.

"Believe you can and you're half way there."