Your Theory Is Crazy, But It's Not Crazy Enough To Be True.

"We are all agreed that your theory is crazy. The question which divides us is whether it is crazy enough to have a chance of being correct. My own feeling is that it is not crazy enough." ~ Niels Bohr

When I was pregnant, the hospital wanted all expectant couples to take a birthing class. The problem was, that finding a class that met at a time when both my husband and I could attend, given our totally whack teaching schedules at that time, was difficult to say the least. So I started canvassing my mommy friends: "What did you learn from birthing classes?" I asked. The unanimous answer was: "To breathe in and out like this, (with accompanying demonstration)." Hmmmm. Well, is that worth all the fuss and bother?? I asked my OB/gyn: "Do you think I should take a birthing class?" And her response was: "It all depends on your and your husband's comfort level with the whole thing. If you aren't worried, and if your husband isn't worried, then it's not necessary." Well this was probably about 6-7 months into my pregnancy and so I figured, yeah, I'm not super worried. I mean women have been giving birth for thousands of years. I'm sure I can do this. Empirically, the theory seemed sound.

And then week 39 hit.
And my belly popped out like a freakish overripe watermelon - and I looked at myself in the mirror and thought "OMG. This thing has to get out of me!" 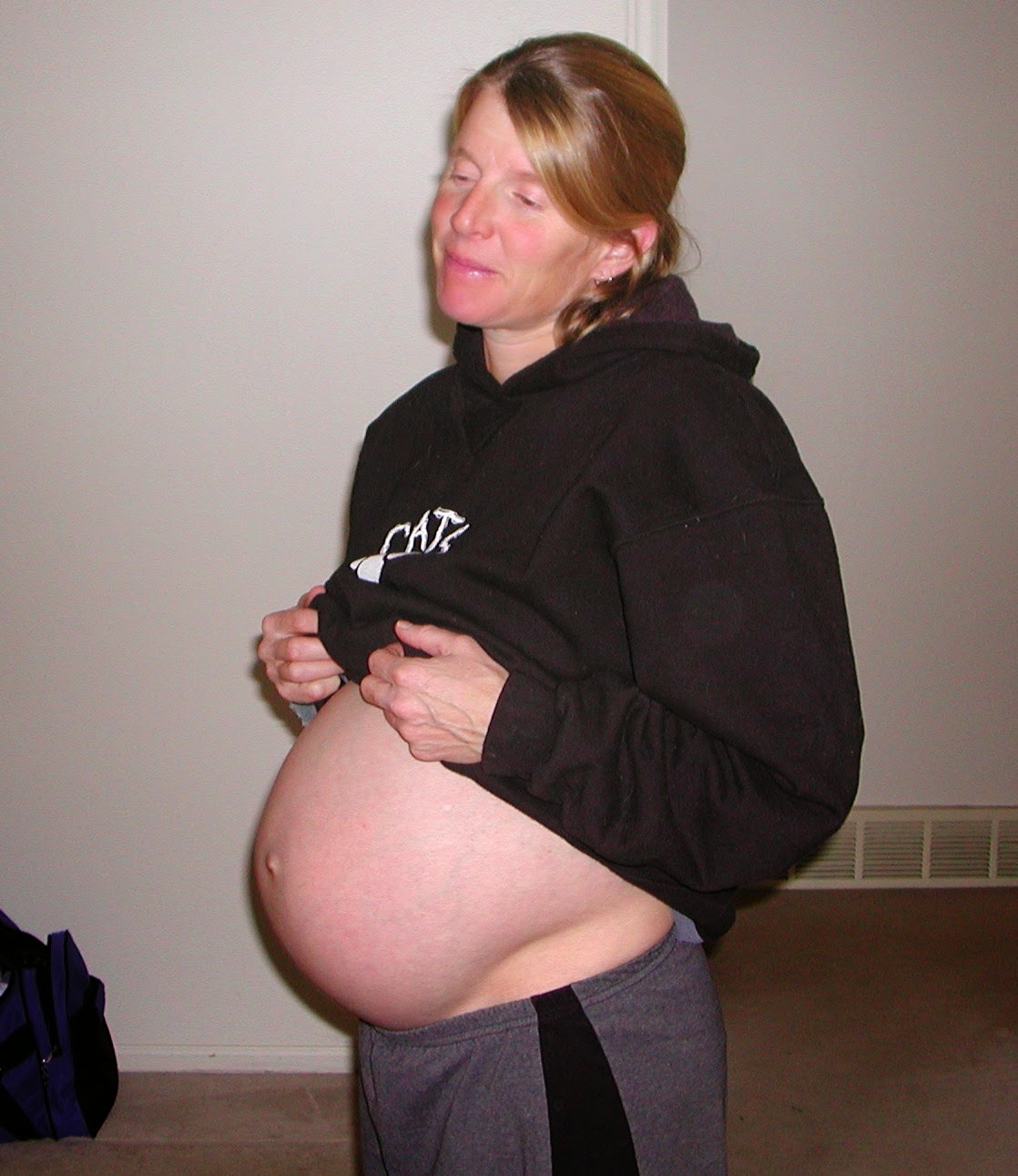 And then my theory began falling apart, challenged by the bare reality of the thing.
And yet. Somehow it all worked out.

Now: It's November, 2013, about a week after running the NYCM. I'm warming up for the USATF Club X-Country race in Boulder when I receive a message from Sandra - something to the effect of: There's a screaming deal for the Des Plaines River Trail Race 50 miler, Oct 2014 - But you need to register by midnight. Now the idea of running a 50 miler has been popping in and out of my head for a while, so I figure, what the hell?? If I don't run it, it's not a huge deal, right??? Of course that works in theory, since the registration fee was so small - but then there is that thing about signing up for a race and the feeling of commitment it carries with it...so the money isn't the issue, but that second part? Yeah. Not so easy to ignore.

Now, Fast forward to April 2014. Registration for the St. George Marathon quickly approaches. Because the race graciously allowed me to defer my 2013 entry due to the flood in Boulder, I'm set to run 2014 - and it's 2 weeks before the 50 miler. I ask if I can defer to 2015, pretty sure that's not gonna fly, and as expected, it's a no-go. So...decisions, decisions...

So I think long and hard on what my approach should be. And my reasoning goes as follows: St. George is hard to get into. St. George is one of the best courses in the country. It would be a shame to turn this into a training run for a 50 miler - plus it's a little too close for that to be ideal. The truth is that I really want to race St. George. I don't want to just run it. BUT training for a marathon and a 50 miler are entirely different beasts (that's MY approach anyway) - so, to train well for both at the same time is a foolhardy, ill-advised  goal: If I train for the 50 I will be overtrained and undertrained for St. George (in different ways). If I train right for St. George, I'll be just plain ol' undertrainined for the 50. What to do...what to do...

So, my decision in June was: Train for St. George, give it my best, and survive the 50 miler 2 weeks later (and I won't even worry about Philly 4 weeks later. Ugggg).

And this all made perfect sense until about a week ago, when the reality started to set in. Add to this reality the fact that I'm training several people for 50 milers, one of whom is running the DPRT. Seeing what 'my runners' are doing vs. what I'm doing is a little nerve wracking. I mean they're all doing great - BUT I'm not doing any of that. Oy. What have I gotten myself into.

Was I suffering from hubris back in June when this theory seemed to make 'the most' sense??

But here I am. It's too late, now, to do otherwise. I will have to stick with the plan and see where it leads. But, like approaching labor and delivery, I'm getting a wee-bit anxious about my theory that made so much sense several months ago.

Time will tell the tale...Somehow, it will all work out.


"In theory there is no difference between theory and practice. In practice, there is. " ~ Yogi Berra