What I think About When I'm Not Running

"Running! If there's any activity happier, more exhilarating, more nourishing to the imagination, I can't think what it might be. In running, the mind flies with the body; the mysterious efflorescence of language seems to pulse in the brain, in rhythm with our feet and the swinging of our arms...On days I can't run, I don't feel "myself" and whoever the "self" is I do feel, I don't like nearly so much as the other. And the writing remains snarled in endless revisions." ~ Joyce Carol Oates

And that's all well and good, but what if you aren't running? What If you can't run? What if you have made the conscious choice not to run, for a bit, for the sake of your long term best interests?

But a chosen time away from running is quite a bit different from a break forced upon us - due to injury, illness, commitments, etc. And I can honestly say, that this is the first time in my life that I have made this conscious decision to not run.

It's okay because I can still do other things, and it sucks because I am doing other things but those other things take so much longer, and truth be told, nothing else does it like running.

I just don't know! Random things float through my head like so much flotsam and jetsam. There's no rhyme nor reason. No order. When I run, I go inside myself and find things I didn't know were there. I tune in and tune out. The world comes into focus and blurs.

And sometimes I fall down when doing this. In fact, in 2009, finally running after 10 months of exactly ZERO running due to injury, I prepared to run the Bolder Boulder (which was 15 months after the initial injury occurred) - which as it turns out, marked the beginning of the new-runner-me. My comeback to running post-injury AND my return to racing (I had no clue then that that was about to happen!) - and the Thursday before BB I fell hard on the trails banging myself up pretty bad - rechiping my previously chipped left elbow, and leaving my legs bloodied and bruised. Yes. That was 5 years ago today. 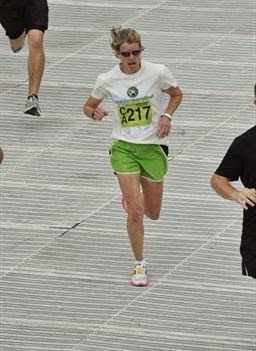 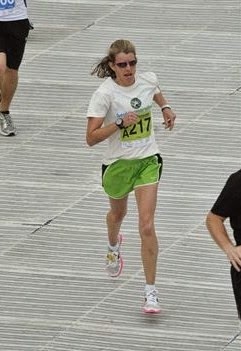 In these pictures you can't see the purple bulls-eye bruise on my elbow or the gashed left hip, but you can, faintly, see the bruises on both shins and my right knee.

Okay. So I tried to go to that inside place when I was biking yesterday and almost dumped myself in a mega-deep ditch along 75th street. No Bueno. I try to go inside when swimming, but then I lose count of where I am. Today I 'came to' and couldn't figure out, for a brief moment, where I was, what time of day it was, and I had no clue whether I was on lap 16 or 46. Blah. Sometimes when I run, I find myself somewhere and it takes me a while to figure out where I am and where I'm going, but that's okay. When I get home from a run, I have imposed some order on the madness. It doesn't last long, which is why I need another fix the next day. And sometimes I return home with really good ideas - but here's the rub: Running ideas are like ideas you have just as you're falling asleep. They are brilliant, brilliant, brilliant at that moment. But then they fly away, out of reach. You can see them, but they are gone. The brilliance evaporates into air.

When I was injured, back in 2008-9, when my running days were over - I was taking a class on the Stoics at CU. How appropriate. As April and May came around, and my prognosis became more and more grim, I found myself completely unable to write my final paper. I took my first "I" (incomplete) for a grad class, or college class, ever. Ever (I did write that paper, a year later, just before the pictures above were taken ;)

So. Now I'm on my 4th day of no running and I didn't realize until today that this is pretty much my 5th anniversary of being back as a runner, but back as a different runner. One who no longer takes what she can do today for granted. A runner who is aware that perhaps her running days will end sooner than she ever could have imagined, or, perhaps not. A runner who really gets that THIS day is what matters. And it's scary to understand just how important seemingly banal, uncontrollable things are to your core essence. Some things are in our control (for instance our values and how we react to situations) and other things are out of our hands. And the Stoics would tell me that I am a little fool for loving something so completely that is entirely out of my control...And I concluded that paper with the following:

The Stoic concept of happiness is very appealing in a number of ways: whether I am happy or not is up to me alone, and it encourages us to recognize and accept that it is futile to try to change what we cannot change.  In some situations, this is required.  However, in most situations, it sacrifices too much for too little.  The task before us, if we are to be happy and virtuous, is to cultivate our characters in a way that allows us to act in a way that is most appropriate and efficacious with respect to a given situation and guiding (universal) principles.  We may be happy when we do the best we can do.

And while a chosen time away from running is qualitatively different from a forced break, not running still leaves me with a muddled mind.