One Year Later: A Different Kind of Closure Sought 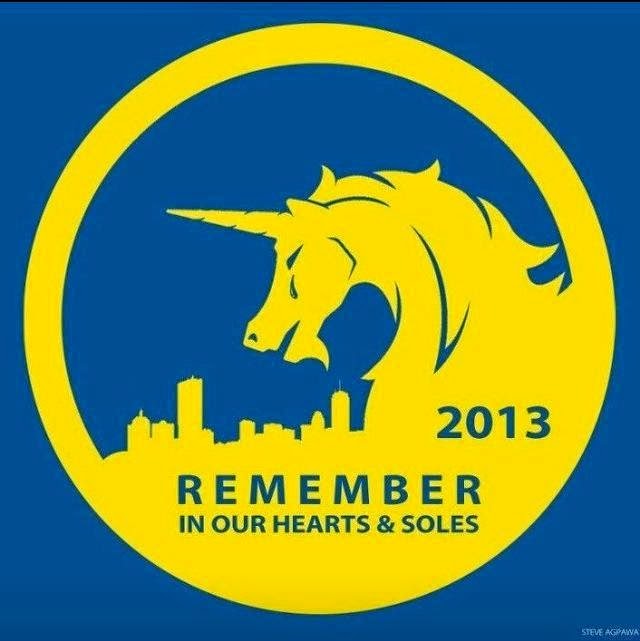 “We shall not cease from exploration
And the end of all our exploring
Will be to arrive where we started
And know the place for the first time.”
~ T.S. Eliot

One year ago today, this is where I am...In Colorado...Though I was supposed to be in Boston...


"I'm lying on the table at In Motion Rehab connected to the e-stim machine. This is where I've been everyday since injuring myself 10 days ago. My hope had been to get to the start of the 117th Boston Marathon, but my body had other plans. And so instead of running from Hopkinton to Boston on that pitch-perfect New England spring day, I 'run' 7.5 miles on an indoor track in the midst of a spring blizzard in Boulder - 13 laps to a mile - and I'm feeling pretty damn sorry for myself.

All I think that whole day is: "Dammit. I shouldn't be here!"

And as electricity pulses through my posterior, I hear about it. I hear Gene and Luz and Heather talking in the other room - there's a tone of disbelief, as I piece together what they're saying. Henry Guzman calls the office. His Lennox Hotel window overlooks one blast site.

Two bombs have just gone off near the finish of the Boston Marathon.

Instantly pictures of blood covered sidewalks, disembodied limbs and chaos begin circulating through the internet. I drive home through heavy snow, sobbing and shaking with grief and disbelief...

And that's been my general state all week. I have been unable really to deal with much this week. After the injury, then the loss of my 16 year old dog, the difficult days before Boston when I felt I should be there - and feeling that life is supposed to be good right now - and it isn't...and now this??? Enough already.

And for the rest of Monday I am inundated with calls, emails, messages, texts...neighbors knock on the front door - Some are friends who think I'm in Boston and check to see that I'm okay. Others send well meaning and heartfelt messages - "I'm so glad you aren't in Boston."..."You weren't meant to be there. You are where you should be."...

One year later, I am getting set to run Boston this Monday. This is something I set my mind to doing last year when I felt such regret for not running. I wished, on that day, that I had just run, even with the injury. I could have just run it. But I didn't.

I had regrets piling up and worming their way incidiously into my being, first about hurting myself when I knew better AND THEN regrets about NOT following through. Regrets eat at you like a caustic poison, and it only recently hit me (like 2 DAYS ago!!):  This stuff has eaten at my soul and spirit this whole year long.

Two nights ago my husband said something that slapped me awake - he said: "You're different".

At first I lashed out, indignantly. How dare he! It hurt like a stab, like a most wounding insult, because clearly this 'change' was not a positive thing. And I became defensive like a scared animal being threatened. And then it hit me. He was right. I had changed. This year I've become someone different, and someone I haven't really liked. Oh, there's been glimpses, from time to time, of the deep-down me, but yes. For the most part I've become overly self critical and scared and nervous and envious and worried - about everything!

When I look at where and when this began, I keep coming back to that day on the track, when I sprained my ass, the week leading up to Boston, and then April 15th, 2013, when I curled up in my basement office shaking and sobbing with sorrow and regret, snow burying the world outside, glued to the computer - searching for word of friends, and responding to messages, emails, phone calls.

Don't get me wrong.  It is NOT ALL about running and Boston and races, and bladdy-blah. And lots of other things figure into this as well.  I am not all overwrought about races and obsessed about running to that extent - though it is an important part of my core-self,  But, something changed last April - perhaps for many reasons. And running is often, but not always, my way of working this crap out.

A couple weeks after Boston 2013, the BAA sent me my 2013 shirt. With all they had to do, why would they do this??? I didn't want it. I could NEVER wear it. I didn't deserve it. I already got rid of my 2013 jacket. But I didn't know what to do with it. So for the past year it has been lying on a dresser, untouched, various garments piled on top of it.

Today, I went out for an easy 6 mile taper jog, on a day that could not be more different from last year. A perfect, coolish, spring day. As I got dressed to go out, I saw the shirt and I put it on. And I wore it...

I never wear shirts for races I haven't run - NYCM 2012 being the exception - I do wear that one - but then NO ONE ran that one. But for some reason this felt like something I needed to do, today - not to say to those passing by, 'I ran this', but to say 'I stand by all runners - they are my people'.  This is an important day for our tribe.

Today, I think of those who where there, those who where hurt, killed, terrified for lost loved ones, scared by the unknown -  who had to deal with the horror and fear first hand. And I hope that they have ways of dealing with that - and they must find their way through this - and I hope that they understand how much we all stand with them. We all have different experiences, and need different things to brighten the dark times of life. I'm hoping to see the light at the end of my own little, personal tunnel.


“At the center of your being
you have the answer;
you know who you are
and you know what you want.”
~ Lao Tzu

So, on Monday, 21 April 2014, I am running away from that person I've become, born of fear and shame and regret, and back to me, because I like me better.