The Sad Truth: Me, and the Treadmill

I rest between sets of lat pull-downs and watch the runners on the treadmills, neatly lined up along the windowed wall. They're all in their own worlds. They're all running their own paces. Different cadences, different idiosyncratic gaits, different shapes and sizes. Some are glued to the TV screen in front of them. Others are listening to music. A few are just running. They are all running to nowhere, like we all are when we end up where we started.

I do another set of lat pull-downs. And then I sit and watch and think.

This has been a very rough winter for running. All over the country (and apparently the US has been hit by one of the worst winters while the rest of the hemisphere has enjoyed a mild winter), runners have been dealing with tests of will, tenacity, commitment, toughness and stupidity of one sort or another. Here, in Colorado, it's been ice and snow and heinous winds, and several frigid spells of sub-zero highs. All but ONE day, I have run outside and I haven't missed a single day of training.  The one day I ran inside consisted of running around the Y's track (11 laps to a mile) for at least 10 miles (I lost count from time to time but always erred on the low count side as runners always do). I did this because of my ongoing tweaky foot issues - and on that day, running inside was more prudent, for my physical well being and my Boston aspirations, than running outside.

But there were many days this winter that I pined for an indoor option other than the track. This track is not, for instance, the most suitable for tempo runs - tight turns and too many other runners makes it difficult to maintain a steady pace - AND the Garmin doesn't work there - SO, arrrgggg, I ran outside on some days that running inside would have been smarter - as in, my TRAINING would have benefited.

And then it hits me, as I sit there, about to pull-down again...

I'm afraid to run on a treadmill!! 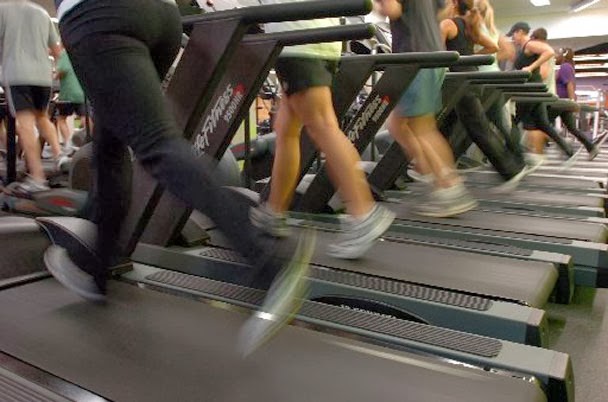 Every other runner in the world... 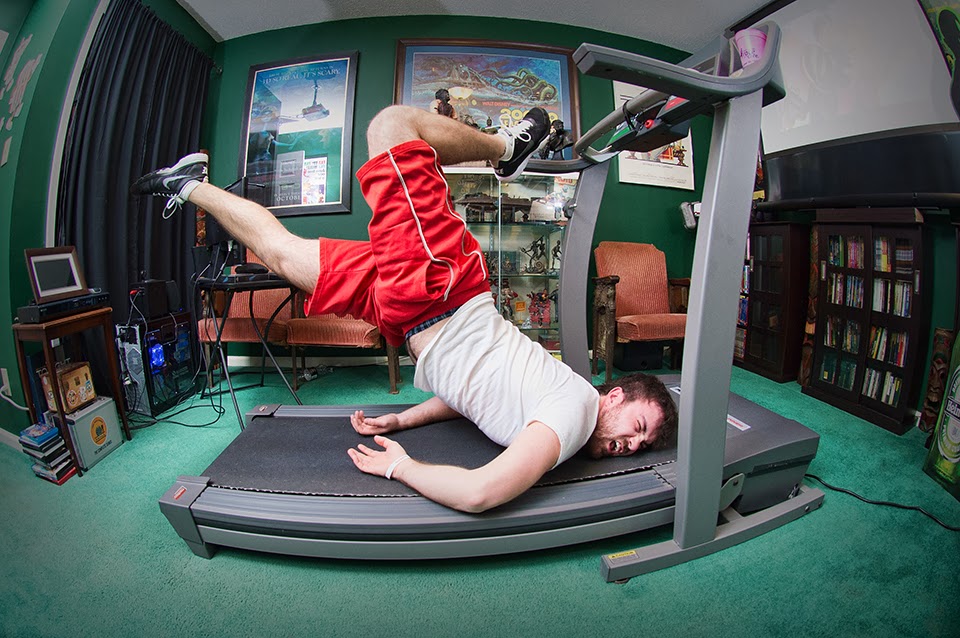 ...and me...
mea culpa, mea culpa, mea maxima culpa
Yup. That's what I said. It's true. I'm 50 years old. At this age you start getting all set in your stupid ways, and well, I'm set in mine. This can be a good thing when habit overcomes reluctance and you head out the door to run even when you don't really feel like it for the simple reason that that is just 'what you do'. But the bad side of this is the fear that maybe you just can't do that thing you've never done before. Okay. I did run on a TM once, when I was 25, and doing a research project on myself for a sports physiology class I was taking at the University of Southern Maine. But that was the first and last time.

For a lot of you, I'm sure you can't fathom such nonsense. I mean, how lame! This is basic stuff. I have the same response when someone says they're afraid to run by themselves - not due to safety issues but just because. I don't get that, so I'm sure most won't get my little problem.

Do you just opt for the option that feels the most comfortable?? I know many women, for instance, who are nervous about running outside, in public, seen by others, by themselves - or others who just find the treadmill 'easier' - No hassle. No stress. No route to choose. No traffic to deal with. And it's just what they do - and so, even on a beautiful spring day, those treadmills are running, all day.

While I will always choose running outside over running inside when that makes sense, the fact is that there are good reasons to hit the TM. I always joke with people that I 'can't' run on a treadmill. That I'd probably kill myself. But it dawned on me that I actually may believe that. Everyone else can do it, but not me. My jokes are a pathetic cover - and they're not even really jokes!!

So, there you have it. People seem to think I have an elitist attitude about treadmills and that I'm somehow trying to prove something by running outside in ALL weather. But the fact is that I'm just plain, simple, stupid scared.

Perhaps 'scared' is too strong. Let's say, 'uneasy'. And the fact is, that in most cases it really doesn't matter to me - but, on those occasions it does, well, there's the rub. And so, now I know.

Most of us tend to prefer what we know and are comfortable with - that may be outside running, TM running, running with a group, always running routes in the same direction, running at the same time of day, running with a dog...etc. but I've been making an attempt to expand my horizon. I did it when I started swimming a little over a year ago after a 20 year break from it. I'm doing it now with the strength stuff. Will I do it with the treadmill. Time will tell and spring is almost here...I may get a reprieve.
at March 07, 2014