For The Sake of Me and My Father: NYCM Take Two

“You are -- your life, and nothing else.” ~ Jean-Paul Sartre

Last year at this time I was preparing to leave for my sojourn to NYC to run the marathon that meant more to me than any other marathon. Hurricane Sandy had crashed into the metro area late Monday night, Oct 29th. Last year at this time I had still not heard from my family. I had no idea how they were. I tried to contact friends nearby. Any word?? No luck.  This is my post from one year ago today: "Emergency Blog Post: NYC Marathon Post-Sandy"

Anyone who's ever read anything here, knows what the NYCM means to me.  This is from last year:


"Back in 1978, during the first running boom, you could still take an easy train trip into the city from the suburbs of New Jersey and watch the finish of the New York City Marathon. It was a big deal, even then, for anyone living in the NY metropolitan area, but nothing compared to the circus it is today. And it was a really big deal for me, a NJ High School runner, because Grete Waitz was running. We all need heroes. She was mine. 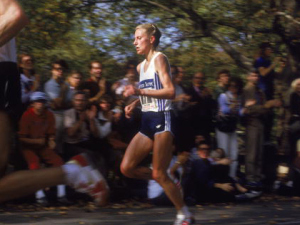 So as I stood in Central Park with my Father, about a quarter mile from the finish, and watched the graceful streak of Grete Waitz flow by me, I was completely ME at that instant, and knew something more true than anything I had (or would) know about myself: I love running, and I want to run this marathon...someday. Now this may sound melodramatic (but, hey, I was a teenage girl. It's all melodrama!) but it was one of those moments where the world seals off all around you, it's you and the world and nothing else exists, and your senses feel hyper-sensitive (like when you're about to pass out and you lose your peripheral vision and the world becomes a tunnel - only better). I don't even know how much time passed. Time froze... 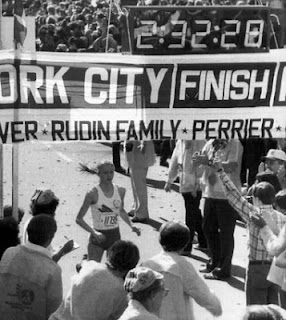 Well, as it turned out,  I was wrong on that one!!

2008: I am standing in Neptune Mountaineering on an ordinary spring day in Boulder, phone to my ear. It's April. The worst of the winter is behind us. The doctor identifies herself. She has the MRI report and has consulted the orthopedic docs. Seems my knee is shot all to hell.

She says in my ear, like she's saying nothing at all, "You won't be able to run anymore. I know this will be hard for you. But you'll have to do something else now."

"Now wait a second" I reply, "Is there anything that can be done?" A panic rises through my body.
"No." she responds, very casually,  "You're too young for a knee replacement."

A KNEE REPLACEMENT. What!

My husband and daughter are with me, chasing each other around the store, and I go into a spin. I just can't absorb what I just heard. I'm 44 years old. 44 FREAKING years old. How can this be??

And the very first thing to pop into my head after that is, and I can still hear this ringing in my head, "Oh my god, I'm never going to run the New York City Marathon".

Why? Why THAT thought? I had been running all these years. Running was as much a part of my daily life as eating. So why didn't I think about that daily need? Why the NYCM??? I ran my first marathon in 1993, and then I was done with that - but it was always with this understanding: Someday, I'd run another. Someday. Maybe when I had finally climbed 5.13 and gotten the climbing bug out of my system so I could really train again. Maybe when I got 'old' and couldn't climb so hard anymore - but I would run another - and it would be NEW YORK. But as my world began spinning around me, all I could think was: I'm never going to be able to run NY. My knees rarely go weak. But they did. Thankfully my husband came to steady me. He didn't know what had happened, but he could see something had happened.

I wasn't ready to give up yet, though part of me battled with the logic of denying what the doctors claimed to clearly know. Luckily, logic lost -  this time.

Now. There is no time to waste. 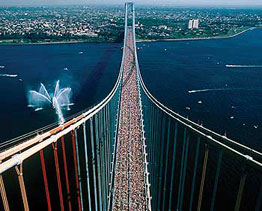 Fast forward 4 years: I am set to run the NYCM 2012 having qualified in after several failed lottery attempts. And my dream is within reach: "Courage: Feeling the Fear and Doing It Anyway"

But then Sandy hits. And then there's the mess that follows: the bad decisions, and the hatred and the negativity and the bad feelings, and the accusations and the verbal attacks and the character assassinations and.... the bitterness. "NYRR's Wrongheaded Resolution: A Letter to Mary Wittenberg "

And I spend some time, again, mourning the loss of a dream. Silly perhaps to some, but so very important to me.  I tried to let it go. I tell myself it doesn't matter. I tell myself that the NYCM is not what it was. And yet that 16 year-old girl, that daughter of a father who encouraged her to run because she wanted to run, could not let go of what it meant to HER. And the gift her father gave her...and continues to give her today...

May, 2013:  I realize that my run in Tucson, the race I ran instead of NY, is a qualifying time. At this point have NO intention of running NY - and I'm already registered for two marathons in October. I'm finished with the NYCM: disgusted, disillusioned, disheartened by how the NYRR handled the whole situation - And YET, Here I have this qualifying time. Will I ever have that chance again??? Because of the 'Resolution', this year those with qualifying times are also put in a lottery. I never win anything, so I figure I still won't get in. An hour before registration closes I send in my registration, after having begun and aborted this process many times since registration has opened. This time I click "submit".

A few days later this pops up in my email:

Congratulations! You’ve been accepted to the 2013 ING New York City Marathon. Celebrate Marathon Opening Day today, and we’ll keep you posted on news and events leading up to race day. Check our site for more details.

This is just the beginning of your journey to 26.2 on Sunday, November 3!

Well, Sh*t. What have I just done!

What does that mean to me? I don't even know, or maybe I cannot articulate it, but I can say that these things make us who we are.

And I will run this for my father, who left me too soon. My father, who brought me into the city on that cool fall day and changed my life then, at 15, and who I became and who I will become.

“The greatest hazard of all, losing one’s self, can occur very quietly in the world, as if it were nothing at all. No other loss can occur so quietly; any other loss - an arm, a leg, five dollars, a wife, etc. - is sure to be noticed."  ~  Søren Kierkegaard