The Boston That Wasn't...Regrets and Revelations 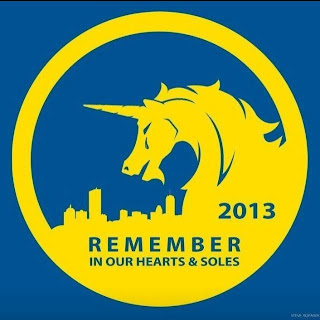 I need to write this for me, and it is in a sense, my way of sorting things out and putting things in proper order. I know everyone's out there writing comforting, empowering, deep and meaningful stuff...I'm not there yet. Please forgive my ongoing Boston obsession and related issues. It will end soon. Or not...

I'm lying on the table at In Motion Rehab connected to the e-stim machine. This is where I've been everyday since injuring myself 10 days ago. My hope had been to get to the start of the 117th Boston Marathon, but my body had other plans. And so instead of running from Hopkinton to Boston on that pitch-perfect New England spring day, I 'run' 7.5 miles on an indoor track in the midst of a spring blizzard in Boulder - 13 laps to a mile - and I'm feeling pretty damn sorry for myself.

All I think that whole day is: "Dammit. I shouldn't be here!"

And as electricity pulses through my posterior, I hear about it. I hear Gene and Luz and Heather talking in the other room - there's a tone of disbelief, as I piece together what they're saying. Henry Guzman calls the office. His Lennox Hotel window overlooks one blast site.

Two bombs have just gone off near the finish of the Boston Marathon.

Instantly pictures of blood covered sidewalks, disembodied limbs and chaos begin circulating through the internet. I drive home through heavy snow, sobbing and shaking with grief and disbelief...

And that's been my general state all week. I have been unable really to deal with much this week. After the injury, then the loss of my 16 year old dog, the difficult days before Boston when I felt I should be there - and feeling that life is supposed to be good right now - and it isn't...and now this??? Enough already.

And for the rest of Monday I am inundated with calls, emails, messages, texts...neighbors knock on the front door - Some are friends who think I'm in Boston and check to see that I'm okay. Others send well meaning and heartfelt messages - "I'm so glad you aren't in Boston."..."You weren't meant to be there. You are where you should be."...

So for the past several days I've been trying to sort through what I've been feeling - and why I've been feeling it. I haven't slept more than 3 hours a night since first injuring myself back on April 3rd. My brain won't ever turn off. I wake at 2 a.m. and lie in bed until 6 a.m. thinking - pointless thoughts, regrets, churning and churning, chaotically, over and over and over. Nothing sorted. Nothing resolved. Just gunk. Gunk.

And then yesterday I get out of bed after another sleepless night and find myself, at last, completely unable to deal. For the first time in 16 years of teaching I realize that I need to take a "mental health day".  Lecturing all day just is NOT going to happen. I can't even imagine trying to discuss philosophy today. No way. All I can muster is slumping on the couch wondering what the hell is going on?

And so I spend the day trying to sort through the flotsam-and-jetsam of my thoughts and emotions. And here's where I arrived...

Not being in Boston was hard at first - I tried to stay away from the internet all weekend because everyone's posts made me burst into tears - and then even harder after the horror struck. I kept thinking "Damn. If I had had plane tickets that I couldn't cancel then I probably would have just gone. Damn you Southwest and your flipping liberal cancellation policies!!"....and a plethora of other nonsensical garbage flows through my mind. If only...if only...if only...

Between the debacle in NYC in November and Boston now - I can't help feeling fairly doomed on the running front. And that's when I realize the connection. The NYC Marathon, as I tried to convey months ago, left me feeling bitter and angry - New Yorkers and runners around the country called me, and all the other runners there, selfish and disrespectful. Even though I knew why I went (to help my family in NJ and to support my NJ friends who planned to run) I deeply regretted going. Flying home from Newark I wished I had never seen what I had seen: the destruction of where I grew-up, and the fierce animosity directed at runners - from both runners and non-runners alike. I saw a mean side of New Yorkers and runners that proved hard to shake. I felt very alone through all of that.

Now, fast forward to Boston - All I wish is that I was there. Now of course the two situations are importantly different, and I'm not trying to equate a natural disaster with human evil - but what suddenly dawned on me was this: I'm now grateful that I went to NYC. Oh, it sucked, and the NYRR handled the race and the 'resolution' horribly - But I did what I could do and that's all I can ever do. And if I hadn't gone, I may have had similar regrets I now have about Boston.