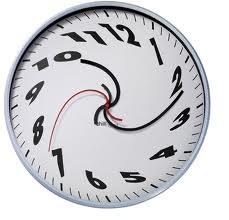 "Life isn't about finding yourself. Life is about creating yourself" ~ George Bernard Shaw

"What, if some day or night a demon were to steal after you into your loneliest loneliness and say to you: "This life as you now live it and have lived it, you will have to live once more and innumerable times more; and there will be nothing new in it, but every pain and every joy and every thought and sigh and everything unutterably small or great in your life will have to return to you, all in the same succession and sequence - even this spider and this moonlight between the trees, and even this moment and I myself. The eternal hourglass of existence is turned upside down again and again, and you with it, speck of dust!"
Would you not throw yourself down and gnash your teeth and curse the demon who spoke thus?... Or how well disposed would you have to become to yourself and to life to crave nothing more fervently than this ultimate eternal confirmation and seal?"  The Gay Science ~ Fredrick Nietzsche'

This is a "what if". A conditional. In philosophy, it's called a "thought experiment", and it's meant to tweak certain intuitions - to press certain issues - to challenge the way we may see things. Thought experiments are often frustrating, because we're not allowed to change them to suit our purposes. We aren't allow to change the conditions so that the problem magically disappears. This makes us uncomfortable. But then in life, can we just make our problems disappear?...

Now you can say to dear Mr. Nietzsche, there's no way life can be all good - that I would want to live every moment over and over, for all eternity - but how about the whole of your life?? That's what he's getting at. When you are about to take your last breathe, have you lived well?

So I reworked this idea to, perhaps, make it more manageable:

I purposely say this as the "last 365 days" because perhaps we should be asking ourselves this each day of the year, not just on January 1st, and then after some weeks pass, dismiss the thought altogether, until the next January 1st.

This thought occurred to me as I realized that I just passed the one year anniversary of a fairly serious and scary concussion, that left me pretty messed up for several months...and moderately messed up for several more. But thinking back on this year, even with the bad parts, these past 365 days have been an amazing adventure, much of it rooted in running and the challenges and gifts running presents to me - IF I grab them. And this year I did grab them I said "Oh what the hell, I might as well..." a whole lot more than I have for the past several years. I played it a little less safe, even though there is no safety net waiting to catch me if I fall, and sometimes it's terrifying. But in the end I feel like I actually did live, at least a little.

We all know, even if we don't consciously acknowledge it, that time passes, and days pass, and years pass, and then we find ourselves on the other side. But where have we been? Where have we gone? What have WE done? What has simply happened to us? It's so easy to get caught up in the daily challenge of just getting through it. We take a deep breath and push on. We survive. And then we do it all over again...and again...and again. And then ten years later? What?

In Letter from Birmingham Jail, Martin Luther King Jr. touches on the issue of time and change, and while his focus is on social/moral change, what he says applies to each of our lives as well. He correctly points out that there is a:


"...strangely irrational notion that there is something in the very flow of time that will inevitably cure all ills. Actually, time itself is neutral; it can be used either destructively or constructively...Human progress never rolls in on wheels on inevitability; it comes through tireless effort..." MLK, Jr. Letter from Birmingham Jail

The idea that TIME itself changes anything is bogus, passive, reactionary - and I believe, ultimately, pessimistic. It's action IN TIME that creates a life as opposed to just letting time pass and allowing life to happen to me. Most of us (perhaps my assumptions are incorrect on this), okay sometimes I, allow life to happen and I ride it like a wave. The wave takes me where it will. I get to shore and breathe a sigh of relief. I made it. But I'm not really living my life in those instances, I'm allowing my life to live me. I'm allowing the things around my to direct me, like a maze set out by something else. I just passively wind my way through -  the way one must go. This is not how I really want to live. But it is so much easier.

May the strength I've gained through running help me in other ways over the next 365 days...and beyond.