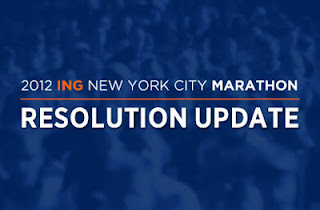 "To know what is right and not do it is the worst cowardice." ~Confucius


These are the stated goals, the professed vision, of the New York Road Runners:


"We are driven by a singular vision. We believe that we can change the world through running. This is the dream and the promise that drives us. Running is our favorite sport but it's more than just that. It's also a route to bettering lives, building community, fueling positive social change—and enabling folks to have a whole lot of fun. Since our earliest days, our vision has allowed us to continuously move forward and to challenge the status quo so that we can grow as individuals, as a team, and as an organization."

Several weeks ago, after more than 7 weeks of deliberation and working through the details and options with their insurers, the New York Road Runners/ New York City Marathon announced their resolution to the issues surrounding the cancellation of the 2012 marathon.

Those who registered for and did not take the deferment option prior to the cancellation of the race, will now have a window of opportunity to choose one of the options below:

MARATHON RUNNERS
2012 Marathoners may choose one of the following options:
My immediate response was critical - Yes, the refund option is obviously the right thing, but doing something half right does not make the whole deal a good one. Option 2 falls woefully short of what is fair and right. When I express my disappointment and disgust, many people respond: "What did you expect? Did you really expect that they wouldn't charge you again?" Well, as a matter of fact, yes! Many people claim that this is a fair and gracious offer. I beg to differ...

Michael Bloomberg and Mary Wittenberg invited us to their city to run. Had the marathon been canceled in a timely fashion, I might be more sympathetic. They got our travel dollars (airport taxes, hotel fees and taxes, rental car fees and taxes, food, etc...). I know...First World Problem...but I refuse to give them $11 + $255 + ANOTHER $255 for 2013.

I know people believe runners are rich, so this whole fiasco amounts to little more than a "first world problem" which when compared to the problems faced by many in this world is absolutely true. But I saved and planned for this race (and I was raising money to support the education of girls in Liberia and Pakistan), and I know and have heard from countless others who planned for years for this trip to run NYC, some coming from much farther away then I came. I haven't taken a vacation in 2+ years. I'm a college instructor and running coach. My husband is a college instructor and climbing coach. I made this investment because (as I've explained in other posts) I've wanted to run NYC since I was 16 years old. NYC is WHY I started racing again 4 years ago.

So there is the cost factor, but that is not what bugs me the most. What bug me the most is that agreements (a type of social contract) have been broken and violated.

So here's what I wish I could say to Mary Wittenberg:

For some runners promises were made and those promises were broken. I ran a qualifying time to get into NY through the "guaranteed entry" option. This was not easy for me, and I dedicated the fall of 2011 to achieve this goal. But my guaranteed entry has never actually been honored, and for that reason I believe that the NYCM/NYRR has failed to hold up its end of the bargain. What about those who got in via the now discontinued policy, of applying 3 times in a row - if you don't get in during those 3 years you automatically get in on the 4th. Their guaranteed entry has also not been honored. Or those who did the 9+ program, running 9 NYRR races over the year and volunteering for 1. Those have not been honored either. We kept OUR part of the bargain, but the NYRR seems to have no problem ignoring your part in the agreement.

So what will I do? I will take the refund. I will not pay for a guaranteed entry that I already EARNED! I will not pay again for a race that was cancelled too late, under suspicious circumstances..

All those who traveled to NYC came in the spirit of support for NY and NJ. We were invited by the city and by you. In fact, had we deferred we would have been required to pay again for the chance to run. But we didn't defer. I came to run with my friends from NJ. They had no power. They had no gas. They lived in a disaster area, but they were still going to run. How could I not support them??

What will I do? Perhaps I will try to qualify again. What does that mean for me, well I'll need to run a 3:35 full marathon or a 1:40 half marathon. It will also mean that, other challenges I might wish to move on to will be postponed a bit. And I'm not sure I'm willing to make that sacrifice. I see no other way for me to do this. The easy way is to just cough up another $255. But that is not the right way. Perhaps there is no longer a 'right way'.

Unfortunately, this whole episode, and how you have chosen to handle this situation, has still left a very sour taste in my mouth about the NYCM. The decisions you made, I believe, are antithetical to the original aim of this race, and the vision of Fred Lebow. But it seems that the NYRR, and you, have lost the vision, and have become just another American capitalist enterprise.

I believe, that for many of us the NYCM will never regain it's stature as the greatest marathon in the world (thanks to this 'resolution'), as the peoples' marathon and the city's marathon. Perhaps you don't care. Perhaps you believe that this will all fade from memory. Perhaps, sadly, you are correct. But for this one runner, this one individual, the girl who stood in Central Park and watched with tears in her eyes and chills in her spine as Grete Waitz flashed by,  you have shattered something that can not be repaired. What a shame. What a terrible, terrible shame.

Character is much easier kept than recovered.  ~ Thomas Paine