“A boo is a lot louder than a cheer.”  ~Lance Armstrong

1:58 a.m...my eyes pop open...and it's off - the mind races...but this time my mind was ready to put to right what I've been tormented over for the past few days.

A couple days ago, for no apparent reason, the thought of pulling the plug on this blog popped into my head. I don't know where it came from, and I didn't even see it coming...but there it was, screaming at me. I made the mistake of Tweeting this thought...and the results were not exactly, well, uplifting or encouraging...Though they were pretty much what I expected.

But let me backtrack for a moment...What's the real reason behind this...

First, I've been writing this blog for almost 2 years. I had no goals with it when I started. It was for me, and in fact, I started freaking out when I saw it getting hits. Ewwww. Strangers are looking at this. This was initially a very uncomfortable feeling for someone who has always written, has always loved to write, but has never allowed ANYONE to read anything she's written. I had the pseudonym for a reason, and initially my real name appeared nowhere...And then I relaxed a bit.

But now, 2 years later, I find myself wondering "What's the point?" "Who really cares (besides me, which was the whole point)?" And I tell myself...this doesn't matter. No one cares one way or the other...and suddenly that mattered in a toxic, soul-killing way. There are, after all, gobs of running blogs out there that are wildly popular. They have thousands of followers and readers, and I shake my head wondering what I'm doing wrong because I don't find (some of) them particularly interesting (Yeah. I know I'm biased - and that sounds like sour grapes!). The thought occurred to me that 2 years, perhaps, is enough for this silliness. Time to grow up and face facts.

And this sent me off into a pit of sadness...

Add to that the fact that I have given myself a forced 2 weeks of very easy and minimal running following a long fall season, and you've got a very anxious, antsy runner...post marathon(s)...an enforced downtime which never settles well, holiday madness, an ailing mother (yeah, I'm not going to go into that), a myriad of other stresses and demands, and the result is a total mess of whirling emotions...because that's the way I am. Post race depression is a common, though little discussed, phenomena among runners.

And so I stupidly "put it all out there" and got what I thought I deserved.

Think about the times you really want to do something scary - that is, scary for you: Run your first 5k...your first half...your first marathon...try to qualify for Boston...And you gather the necessary courage, say it out load, and someone snorts in response. You will hear those snorts of disbelief banging, like a drum, in your head. The high-fives and encouragement will be drowned out by the cacophony of one negative comment. How does that feel? I'm sure we have all experienced that at some point, and it can make you feel foolish - Unless, of course, you are blessed with a large and healthy ego, which I am not, and then you let the negatives float off into the void.

Jean-Paul Sartre convincingly argues that we tend to ask questions of those who we believe will give us the answers we already know are in our hearts - but we look to someone else as an excuse, an out, a way to avoid our own absolute freedom and responsibility.

But the instant I pressed 'enter' I knew it was a mistake.

Silence speaks volumes, and the responses from many friends and self-professed supporters (and I never asked for this, it was offered) was utter silence. From others who did speak up, the suggestion was that maybe this little experiment no longer served me. Maybe I should just let it die on it's own. All of this was well meaning...but it was not what I wanted. I, of course, wanted others to scream at me "No! Don't do it". But that never came, and so I began to morn the death of this little creation. 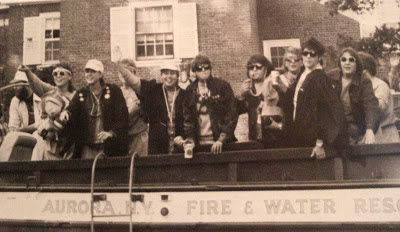 Carolina...holding a beer, before noon...I'm on the left (yes, holding a cigarette!)

Carolina is one of my dearest friends. We've been friends for 30+ years. I've written about her here many times. Right now we live far away from each other and we are not in constant contact, in fact we've "lost" each other from time to time over the years. But the fact is that we are joined in a way that distance and time, and death, can never separate us. I know she's always there. 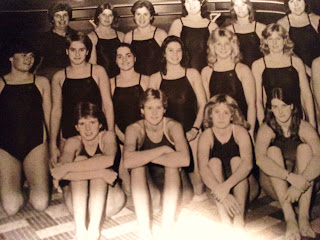 She reads this blog, I know that because she always fires off a word or two via e-mail (she's not on facebook and doesn't do social media - smart move) JUST when I need it. The emails appear in my inbox at the exact time I need them.

Leading up to Boston, 2012, worried about the weather, worried about the fuss-and-bother, and blogging ad nauseam on all of that, her message was:
"Now just enjoy all of this, even the hours of hotel searching, because, seriously, this is all really cool and extra-ordinary.

It deserves all of the fuss.
Embrace it!
I am following this with great excitement!
Love you!"

Two days before Boston, after deciding not to defer, this was in my inbox:
"Good luck! Good luck! Will be thinking of you on Monday..:)))"

And after Boston, which didn't exactly go well, I hemmed-and-hawed over whether to try for another marathon 4 weeks later...her message was:
"Do it, you weirdo."

After qualifying for Boston again at the Fox Valley Marathon I received:
"Yay!!!

Congratulations!!
So Very Cool!
:)"
And now, after Tucson:
"You rock. And are amazing. And are a weirdo. :)
Much Love."
And in many ways we keep in touch through this silly little blog.

So, it occurred to me that while I may not reach many, those I do matter to me. I realize that I can't allow my self-worth to hinge on the acceptance of others - but as human beings we all do have a need to reach out and connect with others. This is one of the ways I enjoy doing that.

And so I will keep at it...for another year anyway...


“A friend is one to whom one may pour out the contents of one's heart, chaff and grain together, knowing that gentle hands will take and sift it, keep what is worth keeping, and with a breath of kindness, blow the rest away.”~ George Eliot

Epilogue: My Inbox today, Dec 21, the end times...:
"Ok so I'm reading your blog post, thinking "No! Don't give up the blog because this is how I keep up with you! Don't do it!"

Then I get a little further . . .
then I got goosebumps.
I guess we really are linked at the metaphorical hip.
Hang in there.
Much love. As always."
at December 20, 2012