Because Every Little Bit Matters...


"Never doubt that a small group of thoughtful, committed people can change the world. Indeed, it is the only thing that ever has." - Margaret Mead

The Boston Marathon is 10 weeks away. I have pledged to run two marathons, Boston and New York City, to raise money for Girls Education International. I have chosen to run for this organization because I believe in the power of education (I am an educator, after all) and in particular, the education of girls, especially in areas where that option is simply not available, as (perhaps) the most effective way to creating a better world. And I've chosen to raise money for this organization because it is a small organization with very little overhead/administrative costs. They work in very difficult areas of the world, and they work directly with local educators, getting the help directly to the girls. Money that is donated directly benefits the girls, not a top heavy organization.
The most effective way to combat poverty, desperation, fanaticism, hatred, violence, and hopelessness is through education. My aim over the the next several months is to raise $5000.00. You do the math...

...How many girls can YOU help send to school? How many lives can YOU change? When we act together, as individuals, amazing things can happen.


"Recently I was told that I am idealistic and unrealistic (and perhaps naive) because I believe runners should sometimes run races for charity not because they gain entry into the Boston Marathon or the New York City Marathon, but just because it's a good thing to do. I was told that people just don't do that. I don't buy it.  I believe that running has the power to wake us from our dogmatic slumber as we realize that we are part of the world community, part of the natural environment, part of our town, neighborhood, country -  and we have the ability to do some good in a world that sometimes feels so big, where we often feel so powerless.


Running makes you feel alive. When you are running you are alive, and, you know it. You have energy and power, and sometimes you may even feel that you can change the world. So now, let's go out and do some good in the world...

(Addendum: I posted the video above because I think the sentiment is spot on. I hope NIKE will practice what it preaches and promises here. Thus far, the company's record is has not been a shining beacon of hope. We runners might want to encourage NIKE to do the right thing around the world - pay living wages, provide safe working conditions, and refrain from sponsoring athletes (ie. Micheal Vick) who contradict the message they're making above (can sport please kick the ass of animal abuse too?). Let them know what you think...@  http://www.nikebiz.com/contact/") "

So, in an attempt to encouraging you to do the right thing, (nudge, nudge) I am launching the 2nd semi-annual Chronic Runner Contest. From NOW through noon (EDT) on APRIL 16th - Yes, that's Patriot's Day in Massachusetts:


1) Either pledged a contribution by emailing me (cqmacmahon@hotmail,com) for any amount - EVEN 1 DOLLAR! or made a charitable donation through my fund-raising page (http://www.firstgiving.com/fundraiser/caolan-macmahon/bostonmarathon2012), and;  2) is also a fellow "Peripatetic' of this blog:

You will be entered to win, the always coveted,  "I RUN - Get Chronic" t-shirt or one month free online coaching (including a detailed analysis of where you are now and how to get where you want to go). There will be two lucky winners! 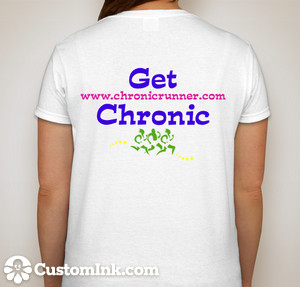 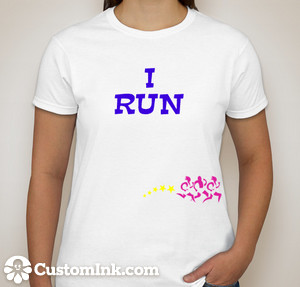