For the Sake of Our Daughters


Arriving in Denver, returning from a trip back east, I pop into the restroom. As I wash my hands I see out of the corner of my eye a mother deftly applying mascara to her 5 year-old daughter's lashes. The girl stands very still, face up, eyes closed, a slight smile on her face. It seems clear that this is a comfortable and familiar routine for both mother and daughter.

Why am I so disheartened, so concerned, so upset by this seemingly harmless act? One of my primary areas of interest and research in my philosophical work concerns the ideas of authenticity, integrity, autonomy, and self - and what those all mean. I observe people through this lens of concern. I am worried because we seem to live in a culture more concerned with image than substance. Our celebrity obsessed culture seems to think it's okay to sell padded bikini tops for preschool girls. It doesn't matter what you do - what matters is how you look. What does that have to do with running, you ask? Well it doesn't really, and yet it does, because nothing happens without something of substance - We must DO and BE in life. Image IS nothing. It DOES nothing. Running is an obvious example of this. You run or you don't run. You do it or you don't, and it doesn't matter how totally rad you look.

Each day I pull on my shorts and shirt, slip on my shoes, open the back door and head off down the trail. I give this simple act and pleasure little thought. No one hassles me about my obsession with running. No one worries that I might wear myself out. I take for granted my ability to choose to push myself physically, mentally, and spiritually through running. Today it seems unfathomable that women were not permitted to run the Boston Marathon until 1972 or an Olympic marathon until 1984. I do not feel old enough to have grown-up during a different era, but the fact is, that I did.

With the passing of Greta Waitz we have lost a pioneer in women's running. The women who were so influential in changing the climate of women's distance running were quietly, yet forcefully, persistent and confident in their convictions. Cathrine Switzer, Julia Chase-Brand, Roberta Gibb, Jaqueline Hansen, Greta Waitz, Ingrid Kristiansen, Joan Benoit Samuelson, among so many others, simply wanted to run, and run they did.

Change is often resisted. When we look at the pictures from the 1950s Civil Rights movement of whites blocking the path of black children going to newly desegregated schools, we recoil at the venomous looks of hatred in the eyes of the white adults as they spit, curse, and shake their fists at the children simply trying to go to school. Likewise, the pictures of men attempting to pull Katherine Switzer from the Boston Marathon course, appears hateful, repugnant, and regretable. To my mind, this remains a dark point in the history of marathoning. 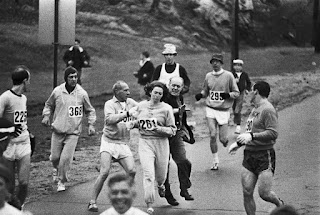 There are many parallels between the civil rights movement and the quests for equal rights for women in long distance road racing. Martin Luther king Jr. argued that individuals have a moral duty to fight against injustice, and to break unjust laws/rules. With regard to racial segregation, that required all people of good will (black, white, male, female) to break segregation laws. The point here is to make a statement through your actions - to show the world that this injustice must not stand. This is civil disobedience.

I don't wish to trivialize the larger women's and civil rights issues that have and continue to challenge our country, but the quiet fight women runners engaged in during the 1970s and 1980s proved, through their actions, that marathoning does not damage the health of women and that it was sufficiently (internationally) popular to warrant inclusion in the Olympics. The point is that change happens through ACTION - EVERYTHING happens through ACTION - Not acting is also an action, but the outcome will be very different. These women runners did what they could. Small in number, their only real avenue to change was to do what they weren't being permitted to do - to run. How simple. Yet that simple act was enough to get a lot of men's shorts in a bunch. Why? Their act of civil disobedience gradually changed minds and reality.

As a woman runner benefiting from the courageous actions of those who came before me, I want to thank them for their persistence and commitment, and their quiet yet effective actions. It is easy to forget that things were very very different not so long ago. For the sake of our daughters (and our sons) let's not forget. Let's show them how DOING changes the world. Image changes nothing. It is nothing.
at June 26, 2011