The Road Not Often Taken: Girls and Running

I ran my first race when I was 8 years old. This was back in the days of gray sweats and Keds tennis sneakers. My parents took me and my 13 year-old sister to the track at a private boys Catholic high school not too far from our house in suburban New Jersey. It was covered in a green squishy rough material. I'd never seen or felt anything like it. I cannot recall what sort of event this was. There were lots of other kids there milling about. I remember noticing that my sister and I were the only girls actually running. Other girls were there, but I never actually saw any others run. The girls sat on the bleachers with their parents watching their brothers race around the oval. We lined up straight across the track, one girl, and five boys. I had never actually run around a track before, but I had run around my block many many times, and I imagined that it would be much like that. The starters gun fired, pop, and feet, knees and elbows flew. I remember moving my legs and feet as fast as I could possibly make them go. As we rounded the final turn I experienced for the first time the feeling you have when you push your legs to a point where you can no longer feel, nor control, them. When you make such an effort that your legs just sort of leave you - and you are your legs - they are no longer just part of you. I came in last, though it was close. That was it. I became a runner that day.

We have many experiences in life and different experiences effect different people in different ways. For some reason this race was life altering, or at least life directing, for me - it was one of those moments that changes everything. From the instant the gun went off I was a runner. It wasn't because some brilliant natural talent came to light. It wasn't because I won a ribbon (back then not everyone got ribbons!). It wasn't because my parents showered me with congratulations It wasn't due to any tangible outcome or result - it was the feeling I had when I ran. It was being on that track, standing and waiting for the gun, watching the other runners nervously step from foot to foot, and being part of an experience where we all really, really tried hard. Why did we try so hard? I really can't say. We were there to run around that track as fast as we could. The aim was pure and simple - and many would say, pointless.

That was almost 40 years ago. And that simple, pointless race turned out to be anything but pointless for my life. After that race I remember getting up early many mornings before school, driving with my father and sister to run laps around Cedar Brook Park pond. My father was a runner as a boy in Brooklyn. He ran many cross country races in Van Cortlandt Park. He ran on a banked wooden track in Madison Square Garden. In high school I ran races on the same cross country course in Van Cortland Park. And that wooden track moved to Setan Hall University, where my high school team had many meets.

I was not a good team player. My sister was the star athlete in the family. She played soccer, field Hockey, basketball, and lacrosse. She always lead the team and her name always turned up in newspaper reports. I ran. In 8th grade I could finally run on a team. My school had a boys team and a girls team. The only problem was that the girl's team didn't have any races scheduled. They practiced, a little, every afternoon, but there were no races. Really!!?? My friend Leslie and I asked the coaches if we could run with the boys. This was back in 1977 - Title IX was passed in 1972 - and the details were still being worked out. At first we were told "no", there was a girl's team and that was good enough. We threatened to go out for football if they wouldn't let us run with the boys. They gave in - I like to think, because of our threats. We were required to wear the boys uniforms which fell off our bone shoulders and skinny waists - but we did it and we ran the races with the boys as the girl's team watched.

And, I've never stopped running. I now find myself in middle age, looking at others around me, and I realize that running really has made a difference in my life. Many of my jock friends who played team sports in high school and college were left adrift following their collegiate careers. Sure, there's "adult leagues" for many sports, but it seems much more difficult to continue these sports after college ends and "real" life commences. Games and practices must be fit into work, and family schedules. With running, you walk out the door and run - and if the only time slot open is 5 a.m., then that's when you run. This is much more difficult, if not impossible, with other sports. As a result, many women (and men) become much more sedentary following college.

So, what's the big point of all this? I firmly believe in the power of running to empower and free girls and women. I believe that the self reliance I have developed through the challenges of running, the discipline, the hours upon hours of running with my thoughts, the appreciation of the natural environment, the physical strength and the feeling of strength it develops, all give me the energy and inspiration to do something important - to make a difference - to set an example. I am a wife and a mother and a teacher - but I am not entirely defined by those roles. Nor did I ever feel that I needed to be a wife and mother to be a real woman. I am not defined by what other people think of me: how I dress, what car I drive, whether my hair is just right (it never is;) - It is ultimately up to me whether I flourish or not. I was given an amazing gift when I was 8 years old (thanks Mom and Dad). I had no idea then. I do now.

While this could be a story about a boy or a girl, a woman or a man - I believe that boys and men are given many more options and opportunities and encouragement to take risks, to push and challenge themselves, and to trust that they can make it home again. We need to tell our girls that they can do it too. I am not alone in my assessment of the effects of running on girls' and women's lives. Here are some amazing organizations doing wonderful things for girls and women, today and tomorrow, and on and on. Check them out. Support them. It will make a difference in your world, their world, and the world of those who follow... 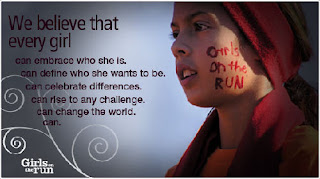